The 500th anniversary of Japan's Saidaiji Eyo festival was Sunday, which meant 9,000 men in loincloths waited in darkness to fight over (and walk out with) two pieces of sacred wood (sorta like a pro-wrestling money-in-the-briefcase match). The Japan Times

In easier-to-explain festival news, Ms. Dani Sperle showed up for Carnival in Rio with only a 3cm-long covering on her hoo-hah, beating last year's 4cm-long patch. Associated Press via Yahoo

Undignified Death: A British nature-lover in her 40s, out walking in backwoods Devon, saw a feather she wanted, chased after it in the wind, and fell off a cliff. Daily Telegraph

Recurring Theme: The latest super-non-flight-risk is drug-defendant Stephen Turo, 56, arraigned in a courthouse parking lot in Syracuse, N.Y., where his 570-lb. self was toted in by U-Haul. Post-Standard

Update: News of the Weird reported on yoga gurus' trying to patent ancient positions and movements so their competitors couldn't use them [NOTW 842, 3-28-2004], but now there's a special Hindu legal unit in India fighting back, worldwide. (Bonus: On the books in the U.S. are 130 yoga patents, 150 copyrights, 2,300 trademarks.) Daily Telegraph (London)

That 11-yr-old Pennsylvania boy who blew away his dad's pregnant girlfriend Friday was charged as an adult (Companion Buried Lede: Though charged as an adult, he used what was described as a "20-gauge youth shotgun.") Pittsburgh Tribune-Review

Comments on Things to Worry About?
Comments 'worry_090224'

People Whose Sex Lives Are Worse Than Yours
Mr. Abdul Aljibari, 43, was arrested one afternoon last week in the parking lot of a Taco Bueno restaurant, perhaps soliciting a man by calling out, "You are sexy." Aljibari at the time had his pants down to his knees and was wearing a black bra. Dallas Morning News
Comments 'abdul_aljibari'

Your Daily Jury Duty
["In America, a person is presumed innocent until the mug shot is released"]
Jerry Lindau, 62, Billings, Mont., may be guilty of operating an unlicensed child-care facility (but maybe it's all his wife's fault). Billings Gazette
Comments 'jerry_lindau'

Do You Have Biblical Morals?

Apparently I don't. I got 0% on the quiz. But your results may vary. Sample question:

Mondegreens is the term for mishearings of song lyrics. For instance, many people mishear the Creedence Clearwater Revival song "Bad Moon on the Rise" as "Bathroom on the right".

The Language Log notes that a new spin on this old phenomenon is for people to find foreign language videos and then to interpret the lyrics as if the people were speaking in English. The linguists are calling this "Autour-du-mondegreens" ("autour du monde" means "around the world" in french).

One of the classics of this new genre is a Dutch children's video, which is construed in English as having the recurring lyric "Fart in the Duck" (Warning: the captions are NSFW):

And here's an example in which lyrics are transliterated from English into Bulgarian gibberish: 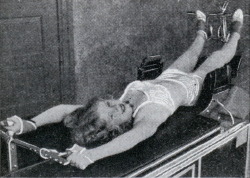 Image from modernmechanix.com. Text from the Salt Lake Tribune, Dec 10, 1939:


A Machine to Cure Headaches
Sufferers from chronic headaches may be interested in the contrivance pictured herewith. The inventor calls it a mechanical chiropractor and he says that through its use it is possible to find relief from headaches, poor circulation and indigestion.
The machine is somewhat complicated but it is said to put a patient through a course of exercises as vigorous as those employed by a skilled chiropractor. It is said to also correct curvature of the spine, weakness and many other ailments in the treatment of which the average chiropractor specializes.

One of these seven versions of UNCHAINED MELODY does not belong with the others. Using your best Sesame Street training, try to guess which one, and register your vote in the comments!

So far as I can tell, this famed bit of performance art is an exact depiction of what most of the WU commenters are always seeking to arrange amongst themselves.

Oklahomans need more protection than you
The legislature is on the verge of banning eyeball tattoos (which sound hoaxy, anyway, but apparently are real) because senators worry about the danger even "if . . . one person" does it. So far, the other 49 states don't believe any of their people are dumb enough to let someone prick their scleras. London's The Sun has the photo of someone getting one, from a year ago. KSBI-TV (Oklahoma City) /// The Sun
Comments 'eyeball_tattoos'

Cliché Come to Life: Charming New York art dealer Mark Zaplin said it's not his fault if those nuns he bought the $2.2M painting from for $450,000 don't have any business sense. [Ed.: Wait, what's the cliché here? Oh, yeah, I forgot: Zaplin's doomed, according to two dozen or so horror movies.] New York Post

Life Is Too Long: (1) John Allwood, 29, broke his own world record by smashing 47 watermelons over his head at the Chinchilla Melon Festival in Australia. (2) So far, 18,000 have signed up to watch, over the 'net, the first-ever live birth of an elephant. Australian Broadcasting Corp. News /// Agence France-Presse via Yahoo

Undignified Death: A 28-yr-old man was run over on Miami's Palmetto Expressway in the middle of the night after he fell off an over-the-highway sign he was tagging. (Upstate, in Fort Walton Beach, a 25-yr-old man didn't quite cross over . . yet, anyway . . in his try, but he did get arrested for trespass because apparently he had to use his neighbor's garage to gas himself.) WPLG-TV (Miami) /// Northwest Florida Daily News

Recurring Themes: (1) A high official at OSHA ($150k/yr) has been on paid leave for nearly 19 months with utterly no work to do after a spit-spat with his boss. (2) An Arkansas insurance company is the latest to deny an employee's worker compensation claim because the employee, on the job but in violation of the rules, was badly injured when he went to help a female customer who was getting beaten up. Washington Post /// KLRT-TV (Little Rock)

Comments on Things to Worry About?
Comments 'worry_090223'

Your Daily Loser
Bad enough that David Kocmit, 27, falsely told police that he had been beaten up by three black men in the parking lot of a strip club in Cleveland. Worse that there was surveillance video proving that there was no attack and that Kocmit had just stumbled and fallen on his face. Worse yet that when confronted with the video, Kocmit still wouldn't give his story up. Plain Dealer
Comments 'david_kocmit'

People Whose Sex Lives Are Worse Than Yours
Public wankers: Danny Lovvern, 34, Belleville, Ill., accused of standing outside his house "every" morning and saluting the little kids walking by to school. And then there's Aussie Kevin Loomes, 58, who (yikes!) used to be media director for Queensland gov't's emergency services. Belleville News-Democrat /// Australian Associated Press via Herald Sun (Melbourne)

And this guy's is way-worse than yours: He reported to the ER at Huntsville (Ala.) Hospital last Wednesday with a crochet needle in his urethra. AWI, but still . . .. News Courier (Athens, Ala.)
Comments 'lovvern_loomes' 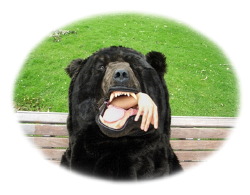 Artist Eiko Ishizawa has designed a bear sleeping bag, which seems very practical, unless a bear happens upon you and decides it wants to mate with this beautiful stranger.