Perhaps someone should impress the permanence of getting inked on people who want a tattoo before they can have it done. Like the guy with a tattoo of a strapped on bomb around his middle. Or how about making your belly button a cat's or monkey's butt hole. I especially liked the guy who had a ruler tattooed on his leg to remind him of his shortcomings. People do the darnedest things to themselves. See 15 crazy examples here http://www.oddee.com/item_96748.aspx
If you enjoy these check the link at the bottom of the page for tattoos with misspellings. Not Safe for Work!


The Badger Song - More amazing videos are a click away

White Snot, the Badger Whisperer, and the Thug-Life Assistance Monkey

The Mean Streets of Beaumont
Alex Fowler, 26, was arrested for an attempted robbery in Beaumont, Tex., and it's good they got this vicious, cold-blooded gang-banger off the street. He's a CRIP, with "Crip for Life" tattooed on his neck, carrying a gun, bandanna across his face. Tough guy. However, the robbery went wrong, and the 87-yr-old victim chased Alex from her home with a can of Raid. Seriously. Beaumont Enterprise

Nothing Gets Past Those Wise Ol' Illinois Tax Examiners
Finally, George Michael's Church of Spiritual Humanism was ruled a fake, and he'll now have to pay the $80k/yr property tax bill on his mansion, for which he had won preliminary approval for an exemption as a church, helped by submitting an image of the house but with a cross on an outer wall (even though George had just Magic-Markered the cross onto the photo). (He later put up a real cross, but it didn't help.) Chicago Tribune

Zebras in the News
(1) The economically and physically decimated Marah zoo in Gaza has a handsome zebra that enchants the kids who have only seen pictures of them, but having a real zebra is expensive. That's why the Marah's zebra is really a donkey, painted with hair dye. Seems to work. They've also got house cats posing as wild cats. (2) Pittsburg State (Kan.) linebacker Joe Windscheffel is out for the season. That's not saying he would have made the team anyway, since a linebacker ordinarily should be tough enough not to get knocked on his ass by a zebra while doing farm work. Slate /// Associated Press via Kansas City Star

I See London, I See France . . .
Belgian artist Jan Bucquoy opened an underpants museum in Brussels, with some artists' actual drawers under glass but also with photos of people who had declined to contribute their knickers (Margaret Thatcher, etc). Bucquoy might actually be onto something: "If I had portrayed Hitler in his underpants, there would not have been a war." "If you are scared of someone, just imagine them in their underpants. The hierarchy will fall . . .." Bucquoy's holy grail? The Papal skivvies. Reuters

People Who Were Reported Being Nuts Last Week But Don't Yet Know They're Nuts
(1) David Shayler used to be a controversial MI5 British intel agent, but things happened, and he sorta went downhill. He's now "Delores Kane" aka the Messiah, on a mission to save humanity by 2012, through legalized hemp and bringing to justice the Americans who staged 9-11. (2) Zimbabwean twins Patience and Memory Neuhe grew up well-off, educated abroad, but returned home under the spell of Seventh-Day Adventists and now walk around all day in only their underwear, tending their garden, waiting for the Apocalypse. Their elderly parents are beside themselves. Irish Independent /// Daily Mail [photos of Delores] /// Zimbabwe Guardian 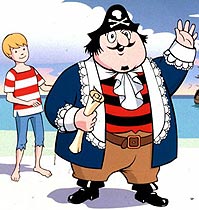 Turn The Other Cheek

John Wotherspoon's career was cut short due to what he claims was a malicious and deliberate hit and run. The hit and run occurred in June of last year, but the accused, Alexander Bogdanovich is on trial in Edinburgh, Scotland now. After an altercation in a nightclub where Bogdanovich was expelled by bouncers, he waited outside and argued with Wotherspoon again then drove off. Bogdanovich allegedly returned and ran down Wotherspoon, who was walking home. Bogdanovich denies these claims. Due to scars on Wotherspoon bottom he can no longer perform as a naked butler. He received facial injuries as well. But the scaring on his backside is why he is no longer employed to entertain 'hen parties' and charity events dressed only in an apron and bowtie. He also lost out on a summer of his modeling career due to the injuries. He says he's going after compensation as well. It's tough when suddenly you're not pretty anymore. http://www.telegraph.co.uk/news/newstopics/howaboutthat/5896861/Naked-butler-lost-job-due-to-car-crash-scar.html