If you liked the original Atari then you might want this watch.It's a watch with the Asteroids game on it. It was made by John Maushammer. He also has made another watch that you can play Pong on. Instead of using buttons you move your wrist to make the ship turn. It's not for sale anywhere because it isn't finished. There aren't any buttons to make the ship shoot.So until this guy makes the buttons, it fires automatically. 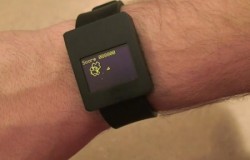 The picture of the pong watch doesn't work on this site for some reason so I put up this video of it instead.

Last Saturday Michael Powers and his friends had a very exciting fishing experience. They were spear fishing and lobster diving off Haulover Beach, Florida in a 21 foot boat. Suddenly a 5 foot bull shark jumped out of the water and into the boat. The shark thrashed around wildly hitting several people and injuring itself. After 30 minutes or so it became exhausted enough to be thrown overboard. http://strangenews.com/
(After hitting link click on appropriate headline on right side of screen.)

This is a great rush to watch, and it made me sad to think it may be fake. What do you think?

I've also included the "Megawoosh Philosophy" video by the jumper, whose purpose it seems is to "stimulate the whole organism".

The Mongolian Death Worm, Plus Another CSI Failure, Plus Obsessive-Compulsives Convene in Minnesota

Iran, North Korea Emergencies Overshadowed by International Sonar Crisis
All week long in Glasgow: the International Piping Live! festival, with 200 bagpipe bands from 16 countries among the 16,000 performers, building up to the actual World Pipe Band Championships on Saturday. Sound waves probably will not make it across the Atlantic, but you might keep your windows closed, just in case. The Herald (Glasgow)

More Tex-Ass Justice . . from Ohio
Derris Lewis only had to spend a mere 18 months in a Columbus jail (awaiting trial for killing his twin brother) before the gov't decided to test out its "evidence." The bloody "palm print" (a one-inch by one-inch smudge) said to match Derris's wasn't bloody after all, and it could have been placed on the wall of his family home at any time. Eighteen months. Columbus Dispatch

Yr Governments in Action!
(1) Remodeling of the Port of Seattle terminal was put on hold because the contractor built a trench, for an important crane cable, to a width of 2.50 inches. Shoulda been 2.52 inches. $200k for the re-do, maybe $800k in lost fees in delaying the terminal's opening. (2) Heath, Ohio (pop. 8,500), concluded it might have overreached, in that its new, six-intersection traffic camera ticketing system wrote 10,000 citations in the first 4 weeks. (3) Hey, no hard feelings toward the two construction companies being sued for contributing to that Interstate 35 bridge collapse in Minnesota in 2007 (killing 13 motorists). Between 'em, the companies have won $50m in new contracts since then. Seattle Times /// Columbus Dispatch /// Minnesota Public Radio News

Critters
(1) This first one's probably make-believe, but who knows, 'cause it's Mongolia. But the Gobi dwellers widely fear the Mongolian death worm (known locally only as the "intestine worm"), which is reputed to be almost five feet long and to spew either (a) deadly acid or (b) lightning . . er . . from its rectum. A New Zealand TV crew is on location. (2) Legit, though, is a 3-ft-long, log-like thingy that washed up on a shore in Wales, consisting of hundreds of writhing snake-like strips. Scientists say, Oh, that! That's just "goose barnacles," nothing special, but they usually hang out in the deep, and this one got carried away. But it underscores the reality that if we could know about everything that was deep in the oceans, we'd be messing up our pants. Courier-Mail (Brisbane) via Herald Sun (Melbourne) /// Daily Mail (London) [yucky photos]

I feel sorry for the guys these mobs prank, but it is funny. The first three pranks are similar, but the last one is the bast.

Do you think someone would get arrested if a mob did this in your town?

Keds is now making a bacon shoe! It's actually canvas with bacon pictured on it, but hey, it's still cool. In fact the associated links show two more different pairs of bacon shoes as well. Looking through more of the links there was also a tee-shirt that said 'Bacon is meat candy' and a bacon tie. Check it out my fellow bacon lovers. http://www.zazzle.com/bacon_shoes_-167779678983910350

Weird enough for you, Weirdos?

That's nuthin' compared to .. . . here, in some (justifiably) neglected branch of the InterWeb(s), is genuine, needs-a-new-psychological-category-of-its-very-own, deep, sincere weirdness. Someone spent a lot of time (wrestling with inner demons, and losing) creating . . . these, then took considerable time and effort to (proudly?) post them on this website.