Whale Of A Tale

A boat sailing off the coast of South Africa was all but destroyed when a 30ft long whale jumped on the deck. Read the story and see some amazing pictures at the link.

Update: Many thanks to Nethie for the smaller version of the whale picture she made for me to post. Thanks also to Dumbfounded for the one he posted in comments.

Did you ever know that America's most famous soldier was also such a talented musician?

This little bit of stop-motion magic was created by my very gifted cousin, Peter St. Amant. 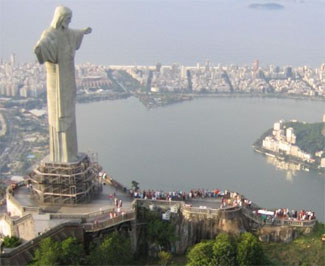 When driving in the UK one best have insurance. A man, Peter Cox, was on the way to do some yard work for a friend and noticed a police vehicle following him. Since the officer did not attempt to pull him over, he continued on and parked in front of his friend's house. Mr Cox asked what the officer wanted when the police vehicle pulled up behind his car. Still receiving no instructions from the officer, Cox proceeded to unload his trunk of supplies. At this point Cox's friend says she observed the officer point a stun gun in Cox's direction for some seconds and as he lowered it it discharged, hitting Cox just 3 inches from his penis. The officer then stated that Cox did not have car insurance. Later the officer said the stun gun discharged accidentally. Shocking!

New World Leader (Among People with "Camel Sex" on Their Minds): Googlistas have tallied search terms per ip-address location and concluded that since 2007, by one measure, the leading country for that (also, "donkey sex") is Pakistan . . which also leads in "rape pictures," "rape sex," "child sex," "dog sex," and so forth. Associated Press via Fox News

(Update) The Market Responds: Alvin Greene Action Toys! That South Carolina U.S. Senate candidate whose out-of-the-box thinking about jobs (e.g., sell "action figures of me") got his wish, sorta. The out-of-the-box Charleston RiverDogs minor league baseball team (proprietor, M. Veeck, a special name in baseball lore) was scheduled, over the weekend, to give away Statue of Liberty toys with Greene's photo pasted on. Associated Press via Business Week

Suspicion Confirmed: Why, of course Allah still heard y'all's prayers, said the highest Islamic authority in Indonesia, even though y'all have not been facing Mecca when you pray for a long time now--ever since we told you wrong. Our bad. From now on, y'all need to nudge over a little to your right. Reuters

Manuel "Lefty" Hernandez, 28, Springfield, Mass., was charged with snatching a man's wallet (probably with his left hand, as that's the only one he has). Police could have charged him with a felony if he had had a weapon, but they said he was unarmed. The Republican (Springfield)

British Ninnies (continued): The Exchange mall in Rochdale, England, caved in to local Asian-immigrant activists and announced it'd convert two of its deluxe toilet stalls to . . "squat toilets," i.e., deluxe holes in the floor. Don't want local Pakistanis and Bangladeshis getting constipated by having to sit down! Daily Mail

Overcoming Adversity, Aspiring to Greatness! A man believed to be in his 70s, with cane and gun and carrying his oxygen tank, failed in an attempt to rob an upscale clothing store in New York City, firing shots in frustration ("You want one? [bam!] You want another one?") (Update: Turns out he was only 63 and, after a police chase, he is no longer with us, anyway.) New York Post /// CNN

The State of Academic Research: (1) A study in the Journal of the American Geriatrics Society reported that women with big hips ("pear-shaped" bodies) have worse memories than women who are round overall ("apple-shaped"). (2) Researchers from Britain's Manchester University have helpfully produced, via mathematical formula, "the perfect handshake." The lead guy said he was surprised to find that there were no such guides before now. BBC News /// Agence France-Presse via Google News /// Newspress.co.uk [longer version; link from Nothing to Do with Arbroath]

This film without comment track was a total hoot! I imagine the MST3K version is even greater. Part 1 begins here.