In honor of Turkey Day tomorrow I thought our WU community could share weird traditions for the holiday. If you have an out of the ordinary Thanksgiving tradition please tell us about it in comments. As an example I will site this tongue-in-cheek (I hope) article about serving roadkill to save money on the holiday groceries. Whatever you have or do tomorrow, be safe, be happy and know you are loved my WU friends. 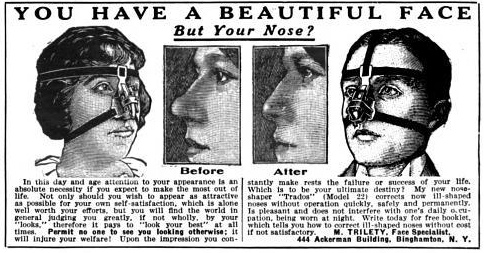 An odd advertisement that I noticed while browsing through a 1916 journal, Current Opinion, on Google Books. It's for the "Trados" Nose-Shaper. The blurb tells us:

Upon the impression you constantly make rests the failure or success of your life. Which is to be your ultimate destiny? My new nose-shaper "Trados" (Model 22) corrects now ill-shaped noses without operation quickly, safely and permanently. Is pleasant and does not interfere with one's daily occupation, being worn at night. Write today for free booklet, which tells you how to correct ill-shaped noses without cost if not satisfactory. M. TRILETY. Face Specialist.
If this was Model 22, I wonder what models 1 through 21 were like? 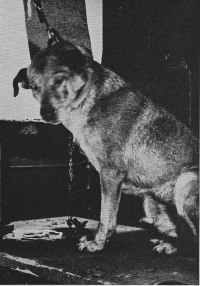 You've probably heard of the Russian researcher Ivan Pavlov who conditioned dogs to salivate whenever they heard the ringing of a bell. Less well known, but more appropriate for Weird Universe, are the experiments of Pavlov's American student W. Horsley Gantt, who was a researcher at Johns Hopkins. Instead of making dogs salivate, Gantt had a dog named Nick who became conditioned to develop an erection whenever he heard a tone. Mandy Merck briefly describes the experiments with Nick in her book In Your Face: 9 Sexual Studies:


Gantt's subjects included Fritz the Alsatian, Peter the beagle, a male poodle known as "V3," and especially the mongrel Nick, subject of "the most meticulous and complete case history of a single animal to be found in the conditioned reflex literature." These animals and others like them were subjected to a barrage of procedures to study conflicts of the drives between, for example, experimentally induced anxiety states and sexual excitement... Nick, in particular, exhibited symptomatic erections and ejaculations whenever he encountered stimuli associated with previous situations of anxiety. Years after one such experiment, in which anxious reactions were elicited by requiring dogs to make a difficult distinction between two tones of similar pitch (a distinction that determined whether the dog was fed), Nick would develop a "prominent erection... within a few seconds after the onset of the tone," Gantt enthused. "We could always count of Nick for a demonstration."
Shown is a picture of poor Nick demonstrating his unusual talent.


In honor of Black Friday shopping later this week, we look ahead to the next holiday with a gift suggestion. Why not celebrate Christmas this year with tales of Krampus, Santa's evil assistant?

NOTE to blog and e-mail readers: Because of the holiday week in the U.S., i.e., November 26th being Black Friday/Materialist's Day, next Monday's Pro Edition will be downsized. Begin lowering your expectations.

Britain's National Health Service Jumps the Shark, Plus Shebbaberbebebshhhhhee and One Level-Headed Guy

British Health Care Once Again Imitates Monty Python: Doctors say they don't like to do this, but something is better than nothing, and a shortage of lungs for transplant means needy patients are being offered . . lungs from smokers. Seriously. Daily Mail

Iran's Emerging Tourist Bonanza: The Khalid Nabi cemetery near the border with Turkmenistan, accessible now only by dirt road, features an array of tombstones shaped either like, er, penises, or, more obtusely, breasts. Who was this Khalid guy? He was a Christian who heroically converted to Islam after his daughter dropped in on the Prophet Muhammad. [Beyond that, I can't comment without my property insurance rates going up.] Global Post

Putting the "Lame" in Lame Duck: The F State governor, Charlie Crist, whose term is up and who got Tea-Partied on his way to a U.S. Senate seat and thus now presides over an empty plate, plans to go out with a bang by pardoning the late front man of The Doors, Jim Morrison, who was busted for waving his weenie on a Miami stage in 1969. Crusader Scott Maxwell of the Orlando Sentinel points out that Crist has for years rejected demands to help seriously innocent people who were convicted based on an "expert" dog-handler who swore in court that his excitable dog could match defendants to crime scenes. (Two independently challenged in court and prevailed; several other cases languish.) Only when one judge finally demanded a courtroom test of the excitable dog was the ridiculousness exposed (but the previously convicted remain convicted). Orlando Sentinel /// News of the Weird M122 (8-9-2009)

The Arrangements Have Been Made (You Lost.) (continued): Louisiana has sold $5.9 billion in federally funded, Katrina-designated bonds since the 2005 hurricane. How much of the state's bond haul has gone to projects inside the city limits of N'awlins? 1% How much for the ground-zero/wiped-out Lower Ninth Ward? 0%. How much for the state's oil industry? 29%. Harper's Index (December 2010) [not free online] /// Newsweek (8-25-2010, by Ariella Cohen, the go-to writer on this issue)

Update--People Do Eventually Grow Up--even George Reiger, 56, who finally admitted that he's been a lonely loser all these years, forced to seek attention by tattooing every available inch of his body with Disney characters. He has evidently found true love and made arrangements to start the de-tatting process (to be paid for by the sale of his museum of Disney memorabilia). Philadelphia Inquirer

A Jubilee of Democracy: (1) Ukraine (where the feminist protesters are serious enough that tops quickly get dropped in public). (2) Italy (where Prime Minister Berlusconi doubled down again on his faltering morality by having a new penis installed on a historical statue in his office). (3) Argentina (where a female legislator, during a live broadcast of an Upper House meeting, slapped a male colleague right in the schnozz). (4) Switzerland (where a nativist political party, warning of the ugliness of immigrants, juxtaposed water-wading photos of young, naked hotties [i.e., us] with older, hijab-clad Muslim women [them]). (5) Denmark (where a similar nativist group theorizes that if an immigration-marketing film featured bare-breasted women sunbathing, fundamentalists would shun the country [ed.: but forgetting that one of the biggest horndogs of 2001 was Mohammad Atta]. (6) Spain (where a Young Socialist get-out-the-vote video featured a babe, umm, climaxing, as she cast her ballot. (1) Reuters via Yahoo News /// (2) Agence France-Presse via Yahoo News /// (3) Daily Telegraph (London) [nice video!] /// (4) [Warning: Not Safe For Work- -woo-hoo!] Daily Telegraph (London) /// (5) Politiken.com (Copenhagen) /// (6) BBC News [another nice video!]

Guess what specialized training the dog pictured has. What is her job? Answer and link in extended.

The Next Bacon Thing!

Plop, plop, fizz, fizz, oh how delicious it is! There are some awesome suggestions for use at the link.