From Cell Phone To Cell

If you're gonna sell drugs you might want to use the keypad lock feature on your cell phone. You know, just in case, because you sure wouldn't want to pocket dial 911 and have a dispatcher hear you discussing a deal. Bet he loses his job at Waffle House too.

A vicious member of the breed pictured above treed a 200 pound bear. Bet that bear is glad his buddies didn't see it!

They sure are cute as a jar full of buttons, though. I love it when they sing the phrases "Linear Motor Girl" and "Sweet Doughnuts" and "Chocolate Disco" in English. And the videos are hallucinatory.

Or rather a quiz to determine how annoying you are to others. Take the quiz and share your results in extended.

Given the 1972 date of this animation, I suggest liberal drug use was involved in the creation, and subsequent viewing, of this video.

Prime Choice Cuts of Underreported News from Last Week, Hand-Picked and Lightly Seasoned by Chuck Shepherd
May 16, 2011 (Part II)
(datelines May 7-May 14) (links correct as of May 16)

Checks & Balances: The special federal court designated to decide on warrant applications for national-security surveillance (that would otherwise violate the 4th Amendment) entertained a total of 1,506 applications in 2010 and approved, er, 1,506. Wired.com

What's living in your bellybutton? Turns out, you can learn a lot about a person. Swab it, and within two days, "large colonies with tens of thousands of cells" are growing, said a researcher. "We can see the diversity of life right there on the plate." (Bonus: There is a Belly Button Biodiversity unit at North Carolina State Univ.) News & Observer (Raleigh)

Chutzpah! Bad enough that a 16-year-old kid at Freeland High School in Bay City, Mich., got infinitely more sex than you did at that age ("intercourse at least 100 times" with teacher Marcie Rousseau, in addition to "at least 75 more" acts, i.e., presumably oral). The kid is now suing to receive "at least" $10,000 per copulation (or, 175 ways, $5,714 per). Saginaw News

Mildly-Justifiable: Jay Rodgers was shot by a stranger in Atlanta. It started when Jay held a door open for him at a gas station, and the guy didn't say "thank you," . . and Jay wouldn't give up nagging him, all the way out to his car, and then the guy turns and, Blam! A month after the shooting, Jay, recovering and interviewed by WSB-TV, implored the ungrateful shooter, on camera: "f you're watching this, do the right thing and turn yourself in." WSB-TV

You Need A Coach For That? A Swedish hotel that provides orgasm coaches. Sign me up! 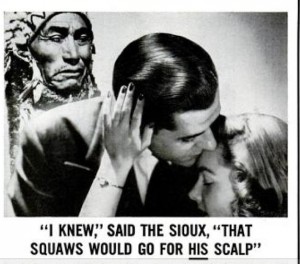 How to insult two audiences at once.

Women regard male conquests as pinning a trophy scalp to their belts.