More on the visual artist here.

Springfield, Ill.: Next Sunday’s NOTW will feature Fr. Tom Donovan, the Catholic priest who had to call EMTs because he was wearing, in the rectory, a gag and handcuffs that he couldn’t get off. (He went on leave, immediately.) Now, his bishop defends him by quoting a therapist as saying that Fr. Donovan was practicing “self-bondage” for stress relief and that it’s “non-sexual” (as if “sexual” would be weirder). Wisconsin Gazette

New York City: All hail high-achiever Aryeh Eller, 46, as he approaches some sort of golden milestone ($1m in salary and benefits) earned in 14 yrs on the job as a schoolteacher--1 year in the classroom and 13 in the union-rights “rubber room” (his reward for beating a fondled-students charge on a technicality, keeping his job, but where, no way, is the Board of Ed letting him near students again). New York Post

Keene, N.H.: The best that Dr. Donald Holshuh (a grown-up) could come up with (allegedly), having just been testified against by a dentist in a license-suspension case, was to go to the dentist’s office and pee on his door. WMUR-TV (Manchester, N.H.)

Cowley, England: Nora Sly, 60-yr church member, will be immortalized by St. Mary’s . . . by having a cement gargoyle that sorta resembles her smiling face in the church’s new tower. Gloucestershire Echo [2 photos]

Sanford, Fla.: Pastor Sam Hinn, the brother of televangelist Benny, admitted to the Gathering Place Worship Center that he had been “drawn into” violating commandments VII, IX, and X. Orlando Sentinel

Oklahoma City: Meet Mr. Right, single and oh-so-available. Dustin Coyle, 34, was arrested for torturing his ex-girlfriend’s cat, and sexually assaulting the woman, because she wouldn’t listen to reason that he loves her. He told police, “If she would just marry me, that would solve everything,” but that he’d settle for her being his girlfriend again--or a one-night stand. The Oklahoman

Atlanta: A pickup truck driver with a “possessed” look played serious bumper cars over a 15-mile stretch around Atlanta last Wednesday. Could it possibly have been Michael Snider, 70? Associated Press via Athens Banner-Herald

Artist Nancy Peppin specializes in using Twinkies in her work. She sees herself as working in the tradition of Warhol. His Campbell's soup can art was her initial inspiration. Sometimes she makes art out of the sponge cakes themselves, and sometimes she creates paintings, photographic prints, etc. that feature Twinkies. Either way, they're her muse.

She's been creating Twinkies art since 1975, but thanks to the current woes of Hostess, she's been getting lots of attention recently. What I'm curious about is how she preserves the Twinkies to make sure they don't rot. Because that idea of Twinkies never rotting is just an urban legend. I also couldn't find any info on how much her pieces go for. [huffpost] 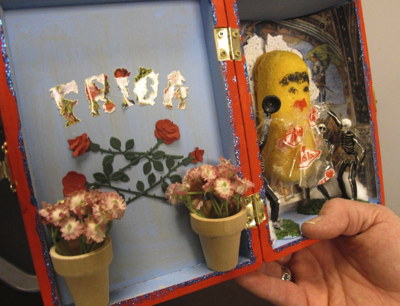 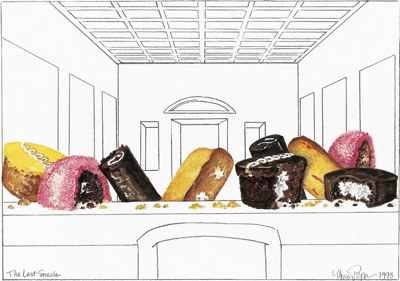 Evil snowmen is a horror trope that had never occurred to me. But I'm sure it's in one Stephen King novel or another already.

Anthropomorphic icicles is another notion I was blissfully unfamiliar with. Can they really run far enough and fast enough to the north to escape Spring?

First They Came For The Gingers

There is now a simple DNA test available to let people know if they have the gene responsible for red hair. Designer babies are just around the corner. Blonde hair and blue eyes for everyone!

Feel the Need for Speed—300 KPH on a motorcyle

Here's the link to a motorcycle racing with an Audi in Germany. The other cars and trucks look like they are parked on the road.

I will admit I watched the entire thing waiting for a crash. But, if the truth were told, this is the same reason we watch NASCAR.

Any WU-vie building a new home should definitely include such a space.

No Longer Weird: Yrs ago, Yr Editor started cataloguing stories that Ordinary Media thought were weird but which we pro’s knew were evergreens. Then, after 80-some, I sorta lost interest. (Here’s a list of the first 66, which I was prevented by law from updating was too lazy to update. Still, I think there are “legacy” NLWs that must be preserved, notable because (a) they keep happening, relentlessly, and (b) common or not, they remain weird. Case in point: Peng Xiahua, in Guangdong province, China, became the most recent person to arise from the dead--literally, just about to be entombed, surrounded by grieving family, she sprang back to life. Coroner’s error? Or miracle? It’ll probably happen again this year, somewhere. Shanghai Daily

Tampa: Imagine that Howard Stern and Don Imus, at their peak of popularity and young enough to think “nasty” was an attractive attribute rather than a business model, waged a continuous metaphorical knife fight. In Tampa, that would be the premier radio shock jocks Bubba The Love Sponge Clem (his legal name now) and “MJ” Schnitt, and it has been ugly and immature and funny and sad. Except Schnitt tired of it first and has sued Clem for defamation and harassment (e.g., for calling Schnitt’s missus a “whore” and coaxing Clem’s fans to threaten Schnitt and creatively hassle him, such as by egging his car). The long-awaited trial is now on, loaded up with gossip, tears, laughter, outrage, ridicule, and so on--until Wednesday evening, when Schnitt’s lawyer was arrested for DUI. Turns out (1) “someone” had alerted police that there would soon be a DUI leaving the restaurant where the lawyer was dining; (2) a yowza paralegal at Bubba’s lawyer’s firm (masking that fact) had bought Schnitt’s lawyer's table drinks; (3) the paralegal talked the lawyer into innocently driving her car home (maybe because her own license is suspended--even though, how’d the car get to the restaurant in the first place); (4) when the lawyer was arrested, his trial briefcase remained behind in the paralegal’s car; and (5) the paralegal, questioned by the judge (straining to avoid a mistrial), took the Fifth "about a dozen" times (reported the Tampa Bay Times). And a good time is being had by all (except MJ’s lawyer, who is in deep trouble with the judge and the bar association). Tampa Bay Times

Recent Poor Journalism: Ahhhh, the headline-hungry, search-engine-optimizing, click-manic, entry-level-editor-on-duty mainstream press! (1) No, a Montreal councillor wasn’t about to introduce an ordinance to require dogs walked in city parks to understand commands in both English and French. (2) No, a Harvard geneticist isn’t looking for an adventurous woman to surrogately bear a Neanderthal-gened baby (but was just chin-stroking about distant possibilities). (3) No, there’s no evidence that “Brazilian” waxing is about to make pubic-hair lice extinct. (4) As Weird Universe’s Patty correctly wondered, can it be true that restaurants’ “calamari” dishes are really the cheaper and visually-similar “pig rectum”? (No.) (5) Portuguese media have been falling for the comforting, $100-word jargon of “economist” Baptista da Silva who had simply figured out that the Portuguese were desperate for an “expert” who would tell them that their fiscal woes were not their fault. [It’s possible that these (except for number 2, which is pure sloppiness) are classic “hoaxes” intended to fool the media. Maybe not. Maybe all five are just sloppiness. Of course, when the subject of “hoax” comes up, may I remind you to visit Alex’s Museum of Hoaxes archive.] Canadian Broadcasting Corp. News /// Reuters via Yahoo News /// Mental Floss /// Slate.com /// NPR 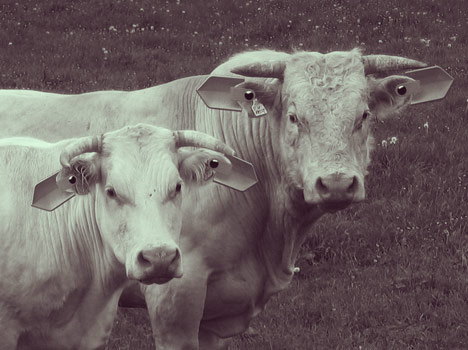 Remee: The REM Enhancing Eyemask from Bitbanger Labs on Vimeo.