An odd mystery from the backwoods of Nova Scotia. Hikers have come across a pond that, in one spot, has a "bubbling column of water" that frequently shoots straight up into the air like a fountain. 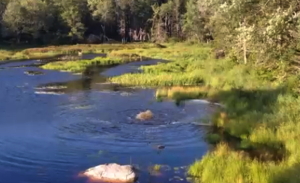 What's causing this? Nobody knows. Top guesses are: 1) maybe there's a leaking pipe in the pond (although this pond is in the middle of nowhere, so how did the pipe get there?); 2) it's swamp gas; 3) it's the Loch Ness Monster, or her Nova Scotia pond cousin.

The one possibility that's been ruled out is that it's a geyser, because a local geologist has pointed out that geysers require "a special volcanic activity which we haven’t had for about 200 million years in Nova Scotia." Global News has a video of the pond. 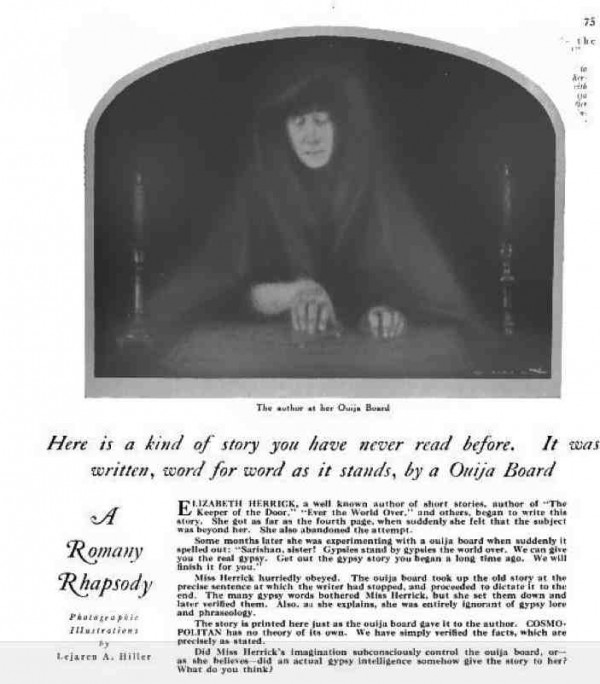 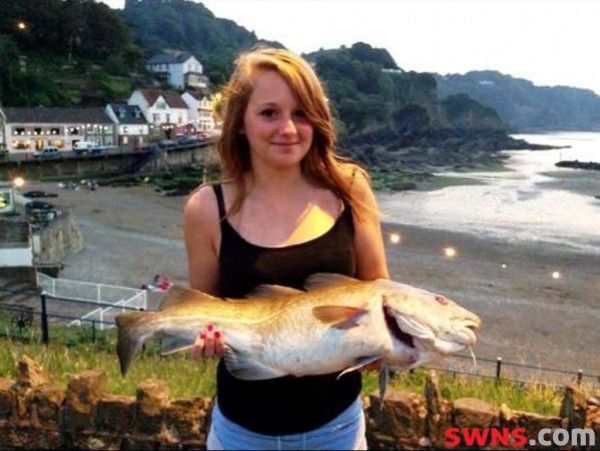 A family kayaking along the British coast made an unusual friend. A dolphin started swimming along with the family and entertaining them with his antics. The animal seemed primarily interested in 14 year old Lucy Watkins, especially so when he brought a 10 pound cod to withing 5 feet of her boat. Then , as if to say, 'join me for dinner' he dove and came back up with a sea bass for himself and started eating. A very nice gesture for a new friend. 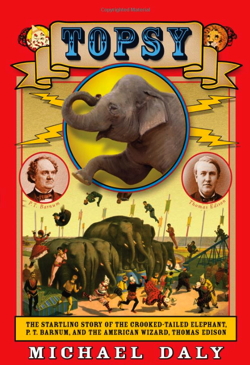 In my last book, Electrified Sheep, I devoted a few pages to telling the story of Topsy, the Coney Island elephant who in 1903 became the first of her species to be put to death by electricity. It's an odd story that tangentially involved two of the biggest names in the history of commercial electricity: Thomas Edison and George Westinghouse.

There have been many elephants killed in all kinds of ways in captivity. But Topsy's death has been a particular source of fascination and horror to people over the years. Probably because the entire event was caught on film by Edison's film company (you can still see that film today on youtube). So Topsy's story has been told quite a few times over the course of the past century.

But now I see that the journalist Michael Daly has produced the first book-length treatment of Topsy's life and death. I haven't had a chance to read it yet, but based on the reviews it sounds like Daly did an excellent job. So it should be a satisfying read for any lover of weird history.

And while I'm at it, let me put in a small plug for myself, since my publisher tells me that the US paperback version of Electrified Sheep

has just been released. It's weird history, now cheaper than before. Plus, there's a kindle version!


What Would Johnny Cash Buy?

Whenever you are feeling troubled or uncertain, just glance at your rubber wristband and ask WWJCB? The Man in Black will show you the way!

Jesse Jackson Jr. Gets 30 Months, But Nothing Added for Tackiness: He pleaded to taking $750k in campaign funds for personal use, and by “personal use,” it turns out that he needed several items of Michael Jackson memorabilia (including a guitar--who knew?), a mink cape, a Bruce Lee wall hanging, a gold Rolex, and an elk head. (By the way, if he serves all 30 months, he’s eligible for $260k in “disability” pay for Members of Congress because of his bipolar disorder.) WLS-TV (Chicago)

Because We Can, That’s Why: Someday, Yr Editor assures you, a critical mass of people will come to the realization that we have too much data for our own good, that the marginal benefit of any more data is negative. In the meantime, you might enjoy the Spreadsheets app that seeks to evaluate if you’re good at sex by measuring how loud you (and your partner) moan during the act, and your thrusts per minute. Seriously. Betabeat.com

Surely Bill Clinton Will Come Help Her: News reports from Iran say the lawfully elected Nina Slahkali Moradi, 27, has been prevented from taking a seat on the city council of Qazvin--because she is a babe (a certified wow-wee babe!). “We don’t want a catwalk model on the council,” said “a senior Qazvin official.” The Independent (London)

Out in Front of This Hoax: No, there is no pirana-related fish in waters off Denmark-Sweden that specializes in biting testicles. That was a joke by a local angler that journalists ran with. CNN

The joke was on Oklahomans who desperately need a driver’s license to get to work, things like that. The queues are ridiculously long, so the state instituted an online appointment system. Suck-ers! Making an appointment online only gets you a place in line to make another appointment for the test itself. What to do now, the sad-sack punk’d losers asked. Officials recommended getting in line at 4 a.m.--except that some people arrive at midnight, and you have to come back the next night. KFOR-TV (Oklahoma City)

Valentino Ianetti, 63, was freed from jail in New Jersey after 3½ yrs of lockup awaiting trial for murdering his wife, who died with 47 stab wounds. The prosecutor has come to somewhat-accept Ianetti’s story, which is that she committed suicide. Star-Ledger (Newark)

Running a Little Behind: (1) Mahmood-Reza Arab was ticketed in Toronto in 2005 for parking too close to a fire hydrant. He filed his challenge in timely fashion. Thus, he goes to trial in September (2013). His case is a little extreme for the city, but not that much. (2) Christo and Sharlene Lassiter of Cincinnati are both law professors, married in 1986 and put in ten good yrs. Since then, not so much. Their divorce files now have 1,400 separate entries and stand accused of deliberate violations of court rules that law professors teach every day. And it’s not over yet. Toronto Star /// Cincinnati.com

Extreme Furrie: Ryan Tannenholz, 28, in Boise, Id., who dressed up in several animal alter egos, was charged with multiple counts of having sex with an actual cat. OpposingViews.com

A Russian surgeon with somewhat of a drug problem was charged with stealing the 5g of heroin he found while cutting open a drug mule in Bogotol hospital in the Krasnoyarsk region. The Guardian (London)

In Portland, Ore., a grand jury indicted 18 people in a cockfighting ring--one of the leaders of which, Romanian national Irina Walker, 60, is reputed to be 55th in succession to Queen Elizabeth as a distant descendant of Queen Victoria. KGW-TV (Seattle) via NBC News

Customs officials in Kyrgyzstan discovered a tunnel underneath the border, being used not to smuggle undocumented workers from Glorious Nation of Kazakhstan but to smuggle grain alcohol by pipeline. (There was also one used for oil, but leading with that wouldn’t generate as many Internet page clicks.) BBC News

Did Ms. Terry Boyd need to hold 2 grown men hostage in her home until at least one of them agreed to schtup her? Couldn’t some man have stepped up earlier? Wausau Daily Herald

Jeez, a couple of suspects don’t appear to be taking the criminal justice system seriously, such as this guy charged with DUI and this one charged with shoplifting.

Newsrangers: Les Budden, John McGaw, Pete Randall, Gerald Sacks, and Derek Costello, and the News of the Weird Board of Editorial Advisors.

How to Cook Carp

Carp has a reputation for having an unpleasant, muddy taste. This selection from Andy Clark and His Neighbourly News (circa 1940) explains how to prepare it correctly:


The editor of the Paisley Advocate doesn't go for carp. He counted seventeen of them, ranging from ten to twenty pounds lying sluggishly like a bunch of pigs in the Saugeen River. Somebody had told him that they weren't very good to eat, so he didn't bother getting a gun to shoot them. He is rather sorry now, for Ross Laidlaw claims that he has a recipe for the proper preparation of carp for the table. He advises: "Clean the fish carefully, soaking it in salt overnight. Then secure a clean pine plank, and place the cleaned carp on it with the skin side down. Sprinkle the fish with salt and pepper, butter it and bake it in a hot oven forty-five minutes. Remove from the oven, throw away the carp and eat the plank."
In the video below, Keith Bell of K&C Fisheries shows a more conventional method of carp preparation. Bonus: at around 3:40 he reveals that Carp Gonad Soup is considered a Christmas Day treat in Czechoslovakia (now the Czech Republic and Slovakia). 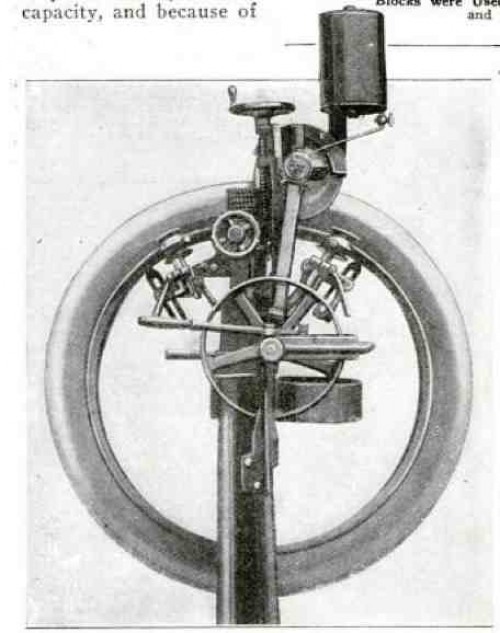