I have a Google Alert keyed to my name, as most authors do. Imagine my surprise to find myself cited on a Taiwanese sci-fi fan page whose name Google chooses to translate thus. I hope the AMA does not find out I'm practicing cancer medicine without a license!

The late-night NBC talkshow wars as a superhero battle? Why not?

Microsoft and Burger King Team Up to Kill You 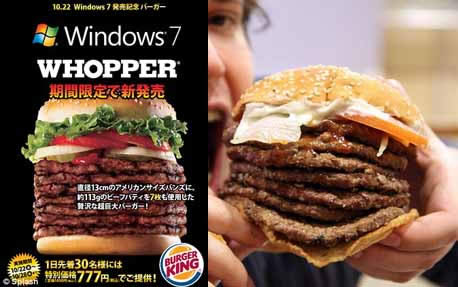 In Japan, Microsoft and Burger King decided to celebrate the release of Windows 7 with a seven patty high burger. For only 777 yen (about $9) you can purchase this five inch tall, 2500 calorie burger. Daily Mail

A few months ago the Saikyō Senritsu Meikyū (Ultimate Horror Maze), at Japan’s Fuji-Q Highland amusement park, was shut down so the zombie employees could go through some new training exercises. Apparently, they just weren't scary anymore.Pink Tentacle

Below is a video of what they had to go through.

From the director of Machine Girl comes...