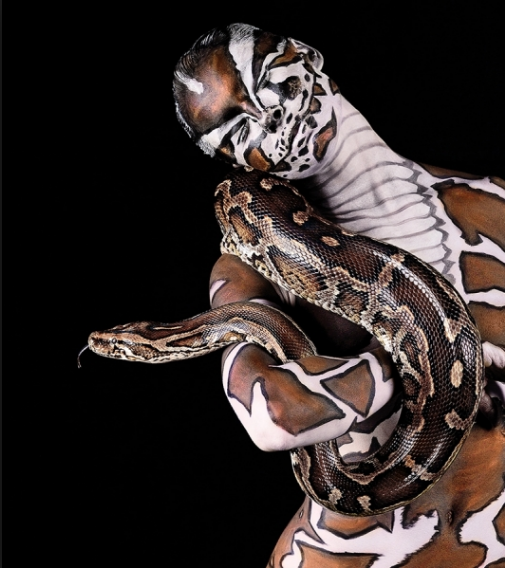 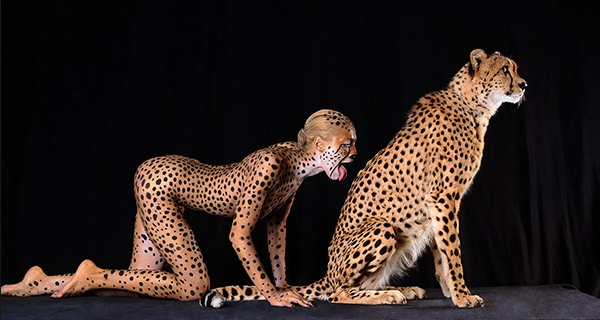 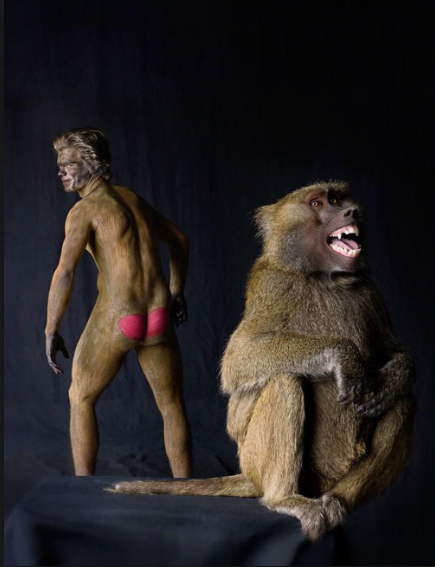 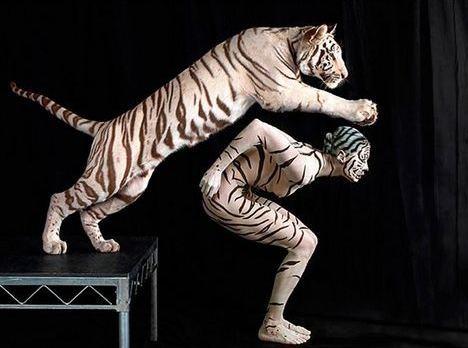 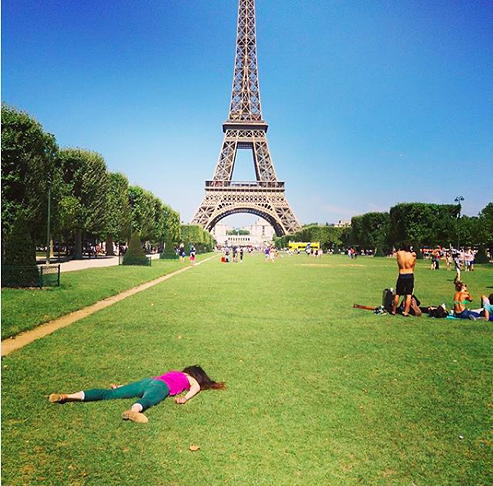 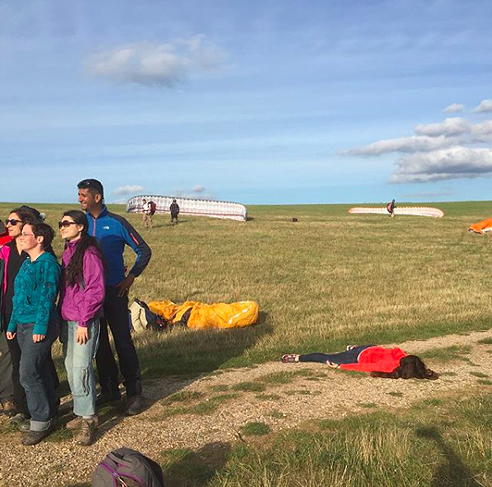 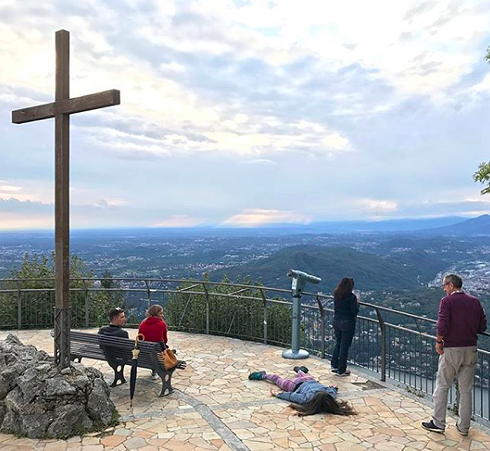 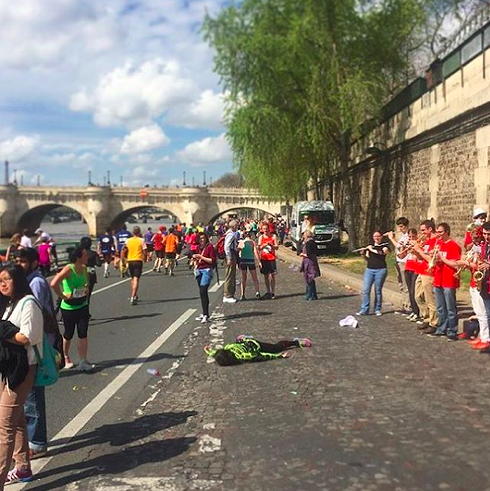 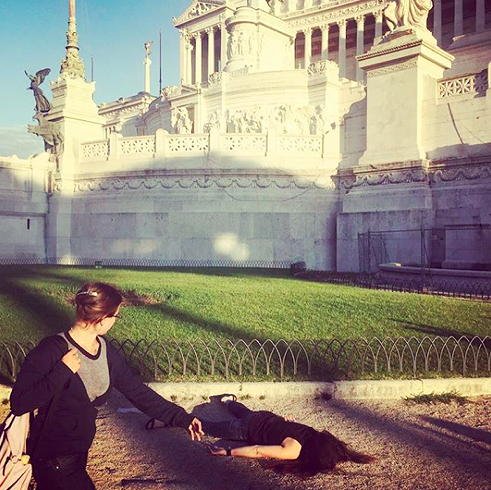 You can see more at this link. 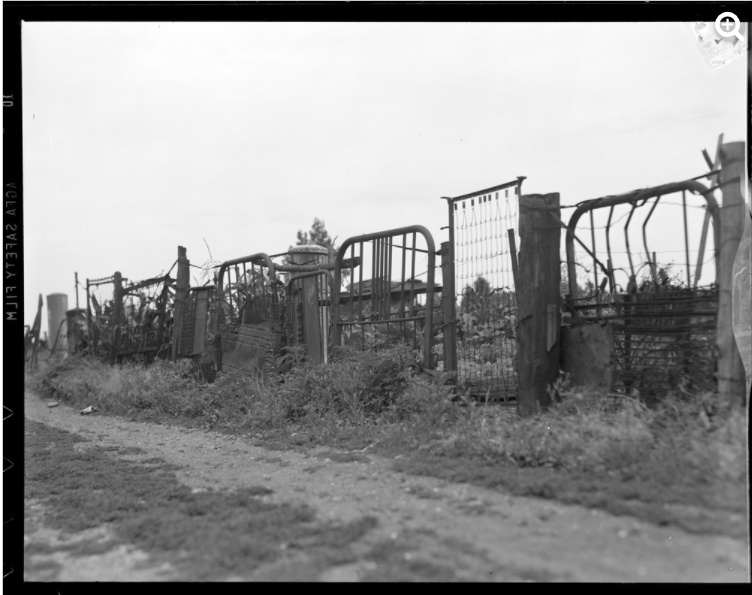 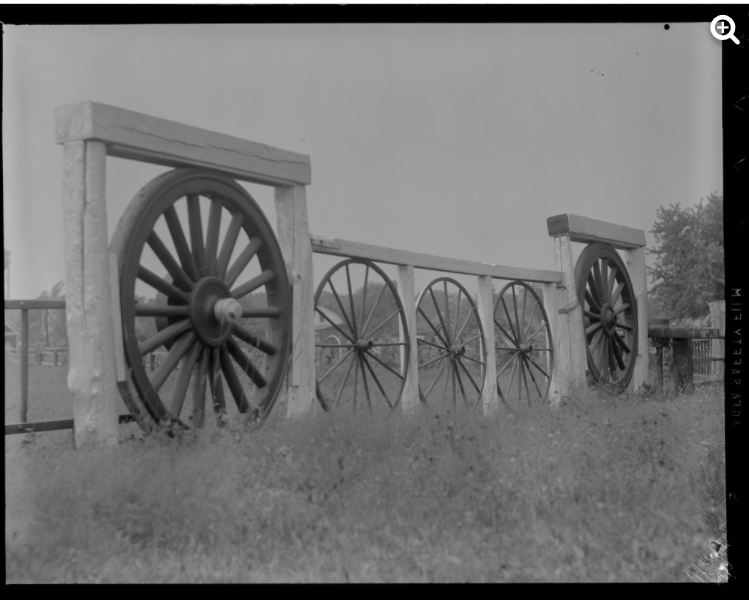 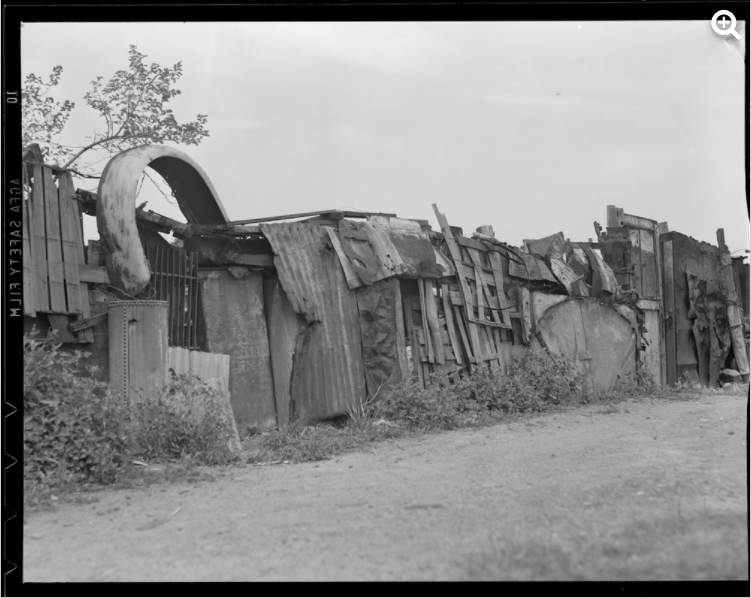 The Art of Hayley Newman

Below are some of the captioned images that artist Hayley Newman displayed at her first solo show, "Connotations - Performance Images 1994-98". 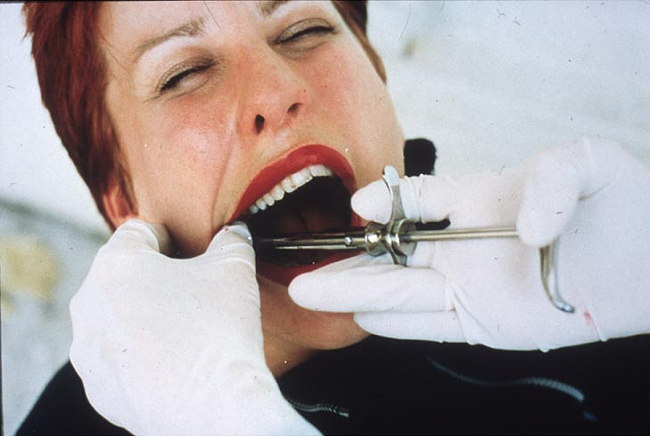 Lock-jaw Lecture Series (1997/1998)
"Over the period of a year I was invited to give a series of lectures on my work. Before each lecture I visited a local dentist and had my mouth anaesthetised. With my mouth made immobile, I gave my feeblest apologies to the students and staff before attempting to talk on my work." 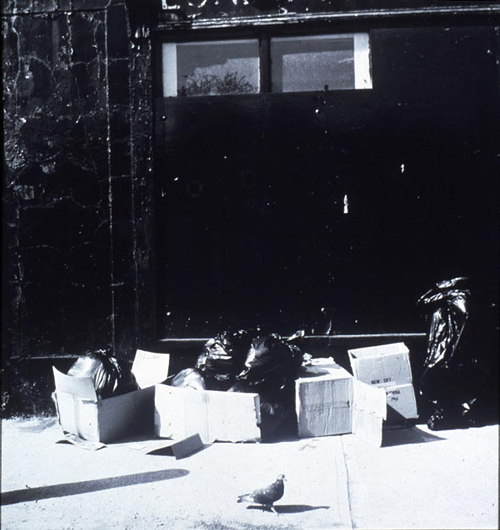 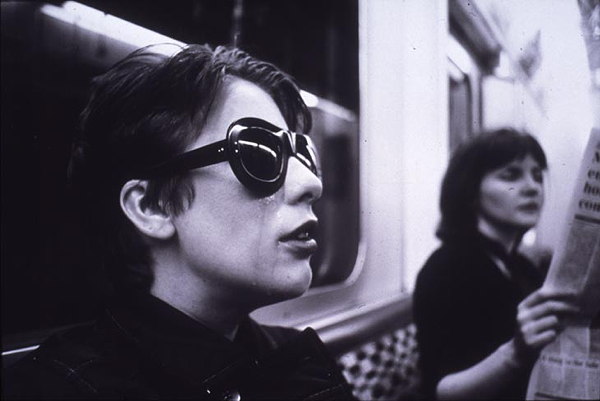 Crying Glasses (An Aid to Melancholia) - (1995)
"Over a year I wore the crying glasses while travelling on public transport in all the cities I visited. The glasses functioned using a pump system which, hidden inside my jacket allowed me to pump water up out of the glasses and produced a trickle of tears down my cheeks. The glasses were conceived as a tool to enable the representation of feelings in public spaces. Over the months of wearing the glasses they became an external mechanism which enabled the manifestation of internal and unidentifiable emotions." 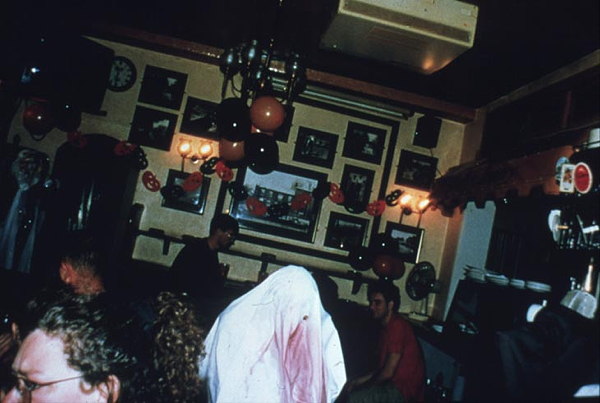 Spirit (1995)
"Soho, London: Dressed as a ghost for Halloween I ran into various pubs in London's Soho, stole a drink and then left."

Here's the punchline, which Newman revealed if you read the fine print in the exhibit guide:


The photographs in the series were staged and performed by myself with most of the images being taken by the photographer Casey Orr over a week in the summer of 1998. The dates, locations, photographers and contexts for the performances cited in the text panels are fictional. In all instances the action had to be performed for the photograph but did not take place within the circumstances or places outlined in the supporting text.

The first foto below is of the 1945 contest. Given that it was the "First Revue" of the sponsoring group, we can tentatively date it as the first such contest. 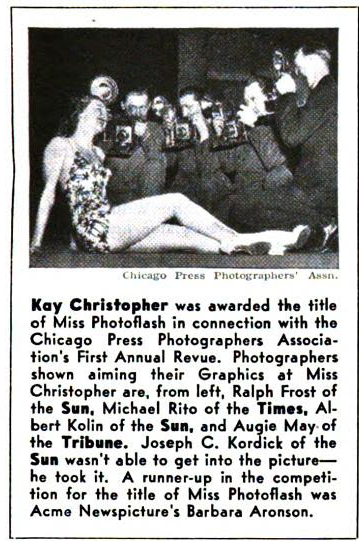 The next foto is from 1968, and definitively labels the contest as being in its 24th year. Did it end then, amidst the tumult of the era?

Here are the 1945 contestants again. 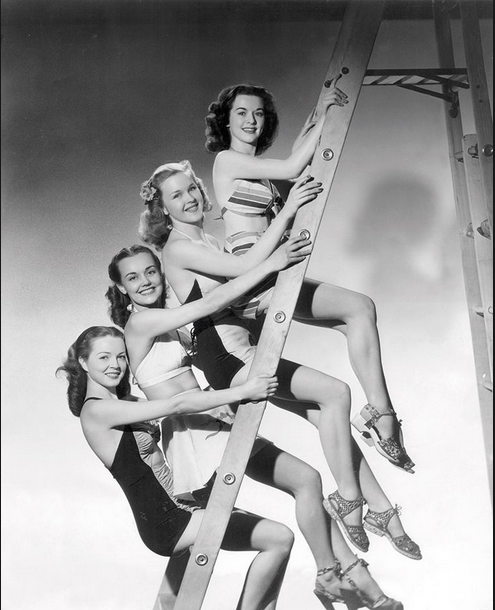 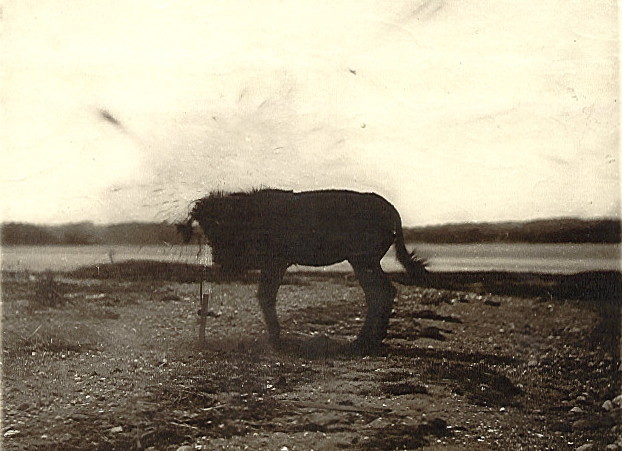 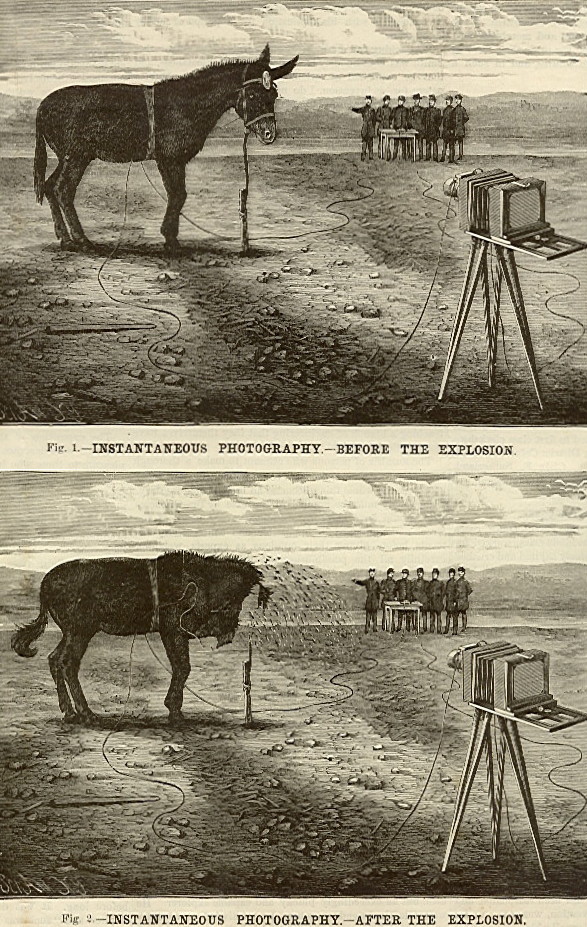 Auroratone was a "process for translating music into color" invented circa 1940 by Englishman Cecil Stokes. The music vibrated an emulsion of crystallizing chemicals, and this was then photographed by a color movie camera, producing a kind of psychedelic movie of shifting colors synchronized with music (but this was the 1940s, before the concept of psychedelics was known in popular culture).

The hope was that these auroratone films could be used to treat psychiatric patients, and they were experimentally shown to soldiers in an army hospital suffering from psychotic depressions. Conclusion: "Observation revealed that these patients were intensely absorbed in the films, that their span of attention to the films was appreciably lengthened after exposure to the films. Weeping and sobbing was observed in some patients. Many patients became more accessible to individual and group psychotherapy immediately folllowing exposure to these films."

Their effect was also tested on juvenile delinquents. One kid told the experimenter, "I think God must have painted those pictures."

A company was formed to commercialize Auroratones and guide their development. Investors in this company included the Crosby Brothers (Larry and his famous brother Bing). Bing sang the music for many of the auroratones.

Treating psychiatric patients wasn't very profitable, so there was hope to find more lucrative applications of the auroratone process. One idea was to transfer auroratone color patterns onto textiles and ceramics. Some silk scarfs printed with visualizations of Bing Crosby singing "Home on the Range" were apparently manufactured, but never sold.

Not many auroratones still survive, but an example of one can be viewed on YouTube:

The auroratone process reminds me of the Clavilux (or Color Organ) invented by Thomas Wilfred in 1919 (previously posted about here).

Flashbak.com has posted an interesting collection of photos (titled "Love Boat Rejects") taken by official photographers aboard American, Norwegian, and Italian cruiseships during the 1990s. Check out the full gallery here. 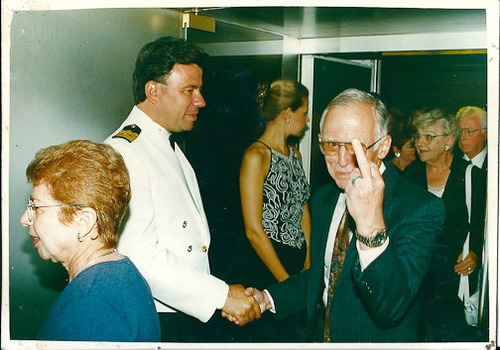 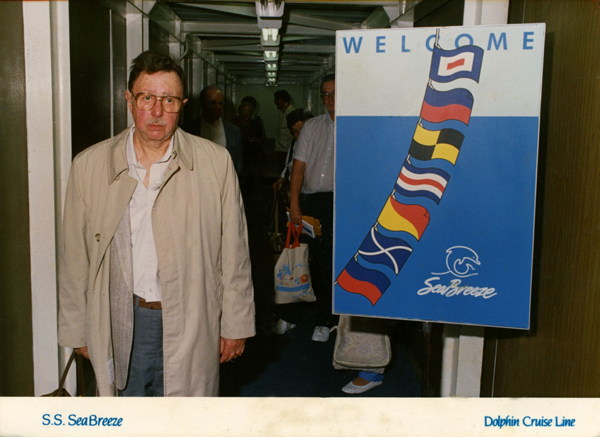 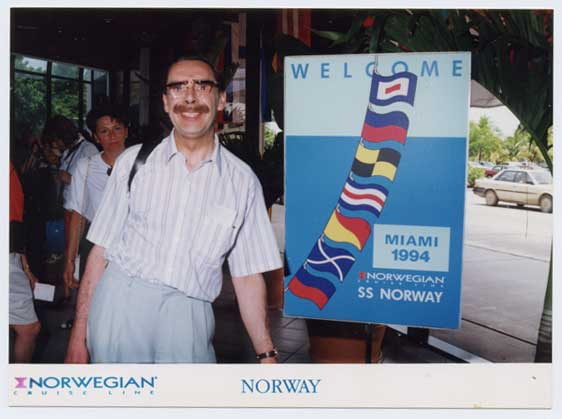