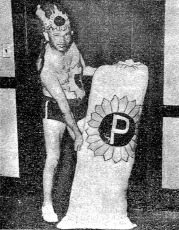 Woody Hockaday (1884-1947) made significant contributions to American history, but he's almost entirely forgotten today. According to the Kansas State Historical Society, he was "the first person to recognize the need for highway marking in the United States." So, on his own initiative, beginning in 1915, he started posting mileage markers on highways. Eventually "Hockaday signs" appeared on 60,000 miles of roads from Washington DC to Los Angeles.

But around 1935 he decided he needed to do something different with his life. So he started calling himself "Big Chief Pow Wow" and launched a "feathers instead of bullets" campaign. Dressed in red shorts, a feather war bonnet, sneakers, a painted sunflower on his chest, and carrying a huge bag of feathers, he would pop up at political rallies and pelt politicians with feathers (or sometimes live chickens). He explained that "to attract attention to peace a man must use sensational methods."

In 1936 he broke into the office of Assistant Secretary of War Harry Woodring and scattered feathers everywhere before being hauled away. And soon after that he launched a feather attack on radio priest Charles Coughlin.

In 1940, he combined a Santa Claus costume with his headdress and showed up in Rockefeller Plaza with a wagonload of 600 chickens. He screamed at the crowd, "I'm Santa Claus from Santa Fe. Peace! The whole world will have peace. Here, my friend, have a chicken."

Soon after that he was committed to an insane asylum. He died in 1947.

The Powers of Congress

Has there ever been another cartoon campaign ad in the past several elections? How could this great idea go unused?!? SpongeBob SquarePants for Obama! Pinky and the Brain for Bush and Cheney! Just imagine the possibilities!

An interesting political cartoon from the guys who brought you The Jetsons and The Flintstones, Hanna and Barbera. 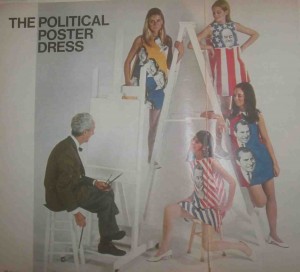