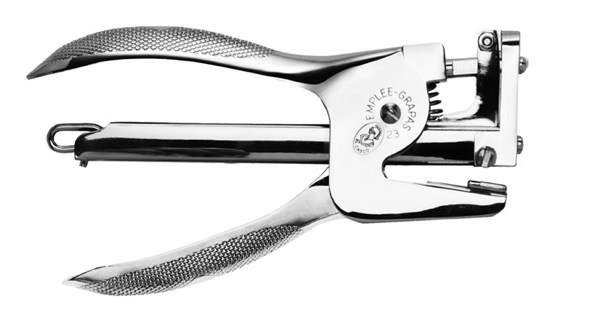 
Comments
This sounds like something the gubment would buy.
Posted by Expat47 in Athens, Greece on 11/01/15 at 10:26 AM
Oh definitely Expat. In fact that is the only customer I can think of.
Posted by Patty in Ohio, USA on 11/01/15 at 10:47 AM
I can envision a need for a superb stapler in places where an electric one isn't suitable, but such situations have to be an incredibly short list.

There are people who want to buy something once in their life and never have to replace it. They're willing to pay top dollar.

They're probably handmade because a machine would make enough for a hundred years in the first hour.

Sadly, the entire stapler industry is doomed! I've read we're going to become a paperless society once these newfangled 'computers' take over.
Posted by Phideaux on 11/01/15 at 03:06 PM


"I've read we're going to become a paperless society once these newfangled 'computers' take over. "
Yeah, They've been saying that since the eighties, and what has it brought us?
VCRs, then DVD players with the setup instructions that can only be played once the device is up and running.

A couple of years back, I bought an espresso machine, with the manual on a video cassette, where the heck was I supposed to use that in this day and age?

Not to mention laptops and computers that have to be hooked up and running before you can run the program that tells you how to hook them up and turn them on.

Step into any office these days, and the shelves that were once full of books are now filled with stacks of print outs (if you're lucky, they'll be in binders with a label) that are nearly impossible to use, lacking content tables, indexes, appendices, or even page numbers.

And clueless management can't figure out why productivity keeps slipping. If it weren't for search sites like Google and Duck duck go, most firms would go under! (Hey Boss, I finally found a copy of that proprietary, in house use only document that we needed to close the deal with... on Piratebay!)
Posted by Captain DaFt on 11/01/15 at 03:25 PM
'Puters only increased the amount of paperwork created. The ONLY upside was that it was all printed by machines and not by hand.

But, let's not go blaming the 'puters just because management didn't know how to, properly, use the machinery that IBM sold them.
Posted by Expat47 in Athens, Greece on 11/02/15 at 12:17 AM
I saw and passed up one of these at an estate sale a couple of years ago for $1. My thought, I have plenty of staplers...

While working for the Federal government I saw on the supply building loading dock six full pallets. Going over, they were all of paper. I asked the supply guy who they were for and he said us. According to him years prior, a full pallet would last a couple of years. Seems with the advent of the computer age bureaucrats saw a need to produce more reports, of greater size, to justify their existence and hence needing more paper. Just before I retired they installed a industrial size shredder to destroy all the reports since our site had run out of storage space and the roaches liked to eat the cardboard boxes the reports were stored in. To me, a sure sign the government was hopelessly out of control.
Posted by Gator Guy on 11/02/15 at 09:59 AM
And then there are all the folk that like to print out their email.
Posted by RobK on 11/02/15 at 11:56 AM
Gator Guy, it's not just the government. In the mid-70's, I worked for a major bank. I was told that there was a daily report produced for the CEO that took two boxes of paper.
Posted by ges on 11/02/15 at 10:54 PM
The commercial aircraft industry is like that also. We used to fly in aging aircraft to OK to remove reusable components and return them to service for flight continuation. The planes coming in were full of boxes, front to back stacked a couple high filled with nothing but maintenance records and the like. Even though people can scan data after the fact, they don't want to be bothered. Let's just keep shuffling that paperwork.
Posted by GFnKS on 11/03/15 at 12:25 PM
Commenting is not available in this channel entry.