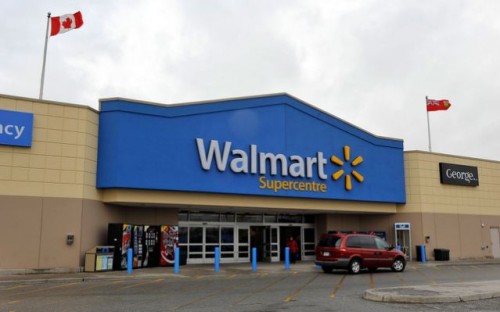 
Comments
It's a gubment conspiracy I tell ya .. pffffttttt

Gotta cut out the whiskey and cokes Patty... or I'm :


If they were flying the Stars & Bars I'd go along with martial law by July 4th. The feds are already butting into each and every case they can & throwing the local cops under the bus.
Posted by Expat47 in Athens, Greece on 04/24/15 at 01:24 AM
For a second there, I thought I was reading "The Onion".

In some ways this story sounded familiar to what I was told many years ago by my best friend's father. Father was a West Coast regional manager for Sears-Roebuck and told us of a store where the employees tried to form a union. The company shut down the store, cleaned house and reopened with all new personnel.

For this WalMart story, I poked around and found a few analyses, mainly from the union's point of view, but they did emphasize that the employees had tried to form employee unions at these locations.

Usually, the simplest explanation is the correct one.
Posted by KDP on 04/24/15 at 10:06 AM
Whatever else, I'm not buying the plumbing problem story.
Posted by TheCannyScot in Atlanta, GA on 04/24/15 at 11:02 AM
Can 't you all see it?! They are talking about secret tunnels and an invasion force of Chinese here to disarm Americans. It's not a US government conspiracy, it's those wily Chinese and they beat us to the punch in digging a hole all the way through the Earth! It's all so clear now. Digging a hole to China was the American invasion plan but the economic downturn slowed us down and they turned the whole thing around on us!
Posted by Miles on 04/24/15 at 11:25 AM
You don't have to look hard to see that Pico Rivera, California store was almost certainly targeted for union activity. I figure they have been watching things since the Black Friday protests and strikes and this is their way of putting some fear into the workers at stores form coast to coast.
Posted by Miles on 04/24/15 at 11:51 AM
So Expat, did the Greek government let you keep your slaves when you moved over there? Or did you have to buy new ones?
Posted by Frank on 04/24/15 at 02:32 PM
The people who come up with these conspiracy theories must have stumbled on a cold war stash of LSD (acid) the CIA was going to put in the Russians drinking water. They are very creative, first the red under ever bed conspiracy, thank you Senator Joe McCarthy, then UFOs and body probes, black helicopters, Russian and/or Chinese military bases in the US, now secret military camps in Wal-Mart's. Next it will be the Taliban in the Afghan navy submarine force launching suicide Muslim frogmen and women at Hoover Dam. On a side note I hear that the busiest Wal-Mart is located in Laredo Texas. I have been there and clerks are hard pressed to keep items on shelves. It's purchased, loaded in vans and goes directly into Mexico with a donation to the Mexican custom officers welfare fund upon crossing the bridge.
Posted by Gator Guy on 04/24/15 at 08:18 PM
The ammunition shortage is a government conspiracy as they are buying it all up. Arm yourselves with weapons etc and be prepared. They will come against us and Walmart too eventually 😉

Justice is simply the advantage and means nothing but what is to the interest of the stronger.
Thrasymachus 5th century B.C., Greek philosopher.
Posted by BrokeDad in Midwest US on 04/24/15 at 10:39 PM
@Frank: Kept about ½ the old ones (they were already trained up) then bought about 30 new ones just for the grunt work.
Posted by Expat47 in Athens, Greece on 04/25/15 at 12:41 AM
Finding out its just Walmart union busting again. Not a surprise really. The company treats unionizing efforts like flesh eating bacteria, anywhere it appears it is quickly amputated from the corporate body to avoid its spread.
Posted by Patty in Ohio, USA on 04/26/15 at 12:00 AM
Commenting is not available in this channel entry.