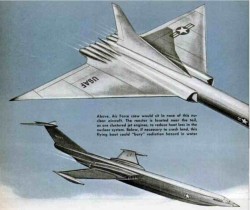 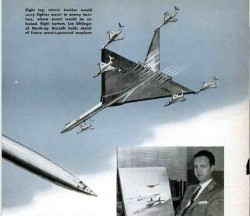 
Comments
The "atomic plane" might be dead, but surprisingly the reactor designed to power it is having a bit of a revival. Called a "molten salt reactor", it operated at very low pressure compared with the LWR/PWR and AGR designs, negating the need for thick, heavy pressure containers. Also it could genuinely be made to fail safe, unlike the ones at Fukushima in Japan.

Most importantly, because the design makes much more effecient use of the neutrons produced by fission, "low reactivity" fuels like thorium can be used in place of uranium, the former being about 5 times as common as the latter.


I am relieved that theorists and designers abandoned the idea of these vehicles. I haven't seen the video yet, but I do remember an experiment where a large plane (B36?) was flown with a reactor inside for exposure measurements. It wasn't a great success.

It seems that the nuclear industry has made the most expedient use of uranium because it is more reactive than thorium. I've been impressed by the fact that thorium reactors "burn" cleaner and need not be as massive as light water reactors to generate power. I've seen proposals for totally enclosed thorium power units that have only electric power hookup leads as the interface to the outside world.

I suppose I won't live to see the day when a truck pulls up to my house and drops off a modular thorium reactor for house power. Too bad.
Posted by KDP on 03/22/12 at 12:21 PM
Would make a great Bond-villain's lair though, an atomic super-jumbo that flies its pussy-stroking VIP, Whitney Prat, on an endless trip round the world.

[Bond is in a small glass "airlock", the villain reaches out to pull the lever that will rotate Bond's prison and throw him off the plane at 70,000 feet up]

Bond: Do you expect me to talk?

[Pulls lever]
Posted by Dumbfounded on 03/22/12 at 01:00 PM
It had nothing to do with "coming to their senses" concerning some hypothetical and highly unlikely crash event releasing a Cloud of Radioactive Death. The concept simply proved impractical, both from an engineering perspective and financially.
Posted by Pile of Pooh on 03/22/12 at 01:14 PM
I'm waiting for a green algae powered version.
Posted by Expat47 in Athens, Greece on 03/22/12 at 01:18 PM
PoP, not so much "impractical" as "less practical than ICBMs", so when Kennedy became POTUS in 1960 there was no strong advocate for continuing research into directly or indirectly nuclear driven aircraft.

Alvin Weinberg, who headed up Oak Ridge and was an advocate of the civilian use of MSR technology because of its safety advantages over "wet" reactors, supposedly briefed the director of research at the DoD that the tech was probably impractical for aircraft use a year or so before Kennedy pulled the plug. But similar concerns had been raised before only for the DoD to continue to throw money at the program.