Back in the days before TV and the internet, people amused themselves over the holidays by playing parlour games. One game popular in Regency-era Britain was "Bullet Pudding" [via tywkiwdbi]. Jane Austen's niece Fanny Knight described it in a letter sent to a friend :


You must have a large pewter dish filled with flour which you must pile up into a sort of pudding with a peek at top. You must then lay a bullet at top and everybody cuts a slice of it, and the person that is cutting it when it falls must poke about with their noses and chins till they find it and then take it out with their mouths of which makes them strange figures all covered with flour but the worst is that you must not laugh for fear of the flour getting up your nose and mouth and choking you: You must not use your hands in taking the Bullet out.
Nothing gets a party going like playing with live ammunition! The illustration below by Francis Hayman shows the moment when the bullet toppled from the top of the Flour pyramid. 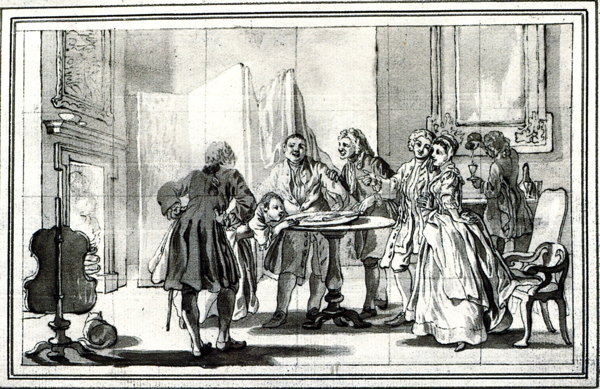 Another game, called Snapdragon, involved lighting a bowl of brandy punch on fire and then trying to pick the raisins and nuts out of the punch without burning your fingers. Austenonly comments, "Though brandy does not burn at a particularly high heat it was still possible to be scorched and  the point of the fun was to watch peoples expressions as they darted their fingers through the flames, picking out the fruit or nuts."

Bullet pudding -- sounds like there is no safe way to "cheat", although going first sounds pretty safe.
Posted by girlgeniusNYC on 12/27/12 at 05:40 PM