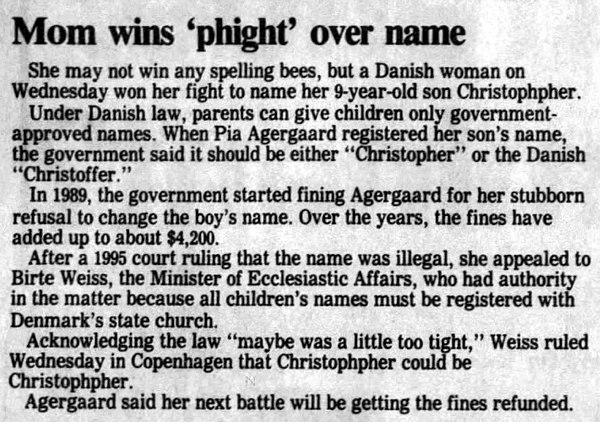 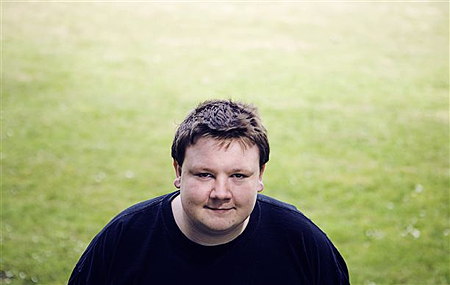 
Comments
If we had such a registry here in the States there would be a lot less Tayshauns, Derons, Rau'shees, Raynells, Deontays, Tarajes, Jozys, Kerrons, Hyleas, Chauntes, Bershawns, Lashawns, Sanyas, Trevells, Sheenas, Ogonnas and Dremiels.
Posted by KDP on 12/01/17 at 03:32 PM
A teacher friend told me the best she had come across was when she had to spell someone's "name" she had heard pronounced: "Le dash' uh". Easy. It's Le-a.
Posted by Virtual on 12/02/17 at 11:59 AM
My older sisters taught me it was okay for me to use the f-word because men of our heritage spelled it with a 'ph' instead of an f, so it wasn't one of the dreaded a four-letter words.

Just gotta shake your head at the overt racism which has been enabled in the last year or so.
Posted by Anastasia Beaverhausen on 12/03/17 at 09:35 AM

Damon Wayans told us Shirley Q. Liquor's children include: Limbo, Crackerjack, Pluto, Salmonella, Orangejello, Velveta, Aloevera, Cocopuff, and Chlamydia. (P.S.: Damon is black.)
Posted by Virtual on 12/03/17 at 10:43 AM
Re Le-a: https://www.snopes.com/racial/language/le-a.asp
Posted by ges on 12/03/17 at 06:56 PM
Actually, Anastasia, what I had in mind is the kind of moniker that gets a kid beaten on the playground at school. Human stupidity knows no race or color.
Posted by KDP on 12/04/17 at 08:37 AM
I'm sure KDP would have come up with nearly the same list two or three years ago.
Posted by RobK on 12/04/17 at 10:53 AM
Lemongello/Limongello/Lemoncello and Oranjelo are real names of Spanish or Italian origin.
Teraje and Teraji are the male and female versions of the Swahili word for "hope."
Josmer Volmy "Jozy" Altidore is the the American-born son of Haitian immigrants.
Sheena is an anglicisation of Sine, the Scottish Gaelic form of the name Jane.
Sanya is a fairly common name in Indian, Russian, and Arabic-speaking countries.
Ogonna is an Igbo name for girls meaning "God's gift."

KDP stole his list of names from this article, which he apparently failed to read. Said failure might be funny if it were not so pathetic. https://www.salon.com/2008/08/25/creative_black_names/

KDP 's bias, like most prejudice, is born of ignorance. The same sort of ignorance that inspires schoolyard beatings over a name, simply because one is too uninformed to recognize or appreciate it. Or as KDP puts it (with a staggering level of unintentional irony): "Human stupidity knows no race or color."
Posted by Frank P on 12/05/17 at 10:42 AM
Commenting is not available in this channel entry.