The following passage comes from "An Unusual Foreign Body in the Rectum — A Baseball: Report of a Case" (Diseases of the Colon & Rectum, January 1977):


A 49-year-old man complained of his inability to void when he came to the Letterman Army Medical Center Emergency Room. Physical examination revealed that he had a distended bladder and a firm, fixed, round object barely palpable which was lodged high in the rectum.

A Foley catheter was passed into the bladder and 800 ml of urine were removed. The patient then reluctantly described his recent activity. He and his sexual partner had celebrated a World Series victory of the Oakland Athletics by placing a baseball (hardball) in his rectum because, as he put it, "I'm oversexed."

The presence of the baseball was confirmed by radiography and proctologic examination. Under spinal anesthesia, the rectum was dilated and manipulations, including hooking the ball and pulling downward (enough to rip the cover of the ball), injecting air above the ball and giving downward traction, and obstetrical forceps delivery, failed.

Through a midline abdominal incision, a low anterior colotomy was made directly on the baseball. The baseball, increasingly swollen by fluid, had lodged in the hollow of the sacrum above the levator muscles and below the true pelvic inlet. The baseball was skewered with a corkscrew instrument. An assistant exerted digital upward pressure through the rectum and, combined with a force enough to raise the patient off the table, the bali was delivered through the colotomy.

No gross fecal spillage occurred. The eolotomy was closed and the patient had an uneventful postoperative course. Gentamicin and clindamycin were given intravenously interoperatively and for five days postoperatively. Follow-up examination a year later revealed normal bladder and rectal functions. 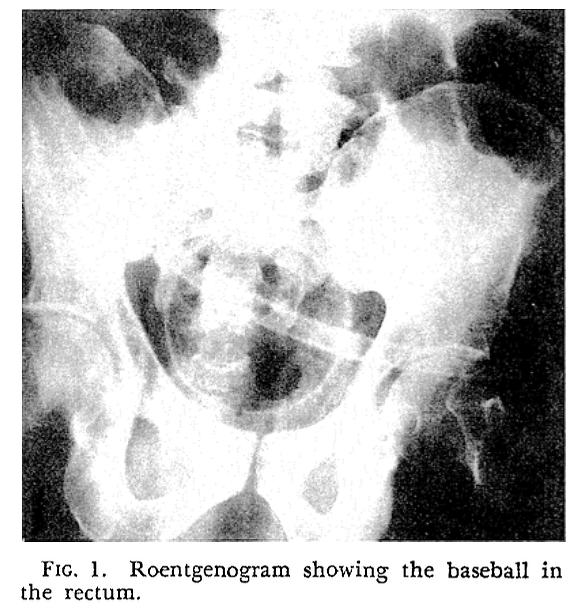 The same article offers some other interesting bits of info later on:


Various techniques for removing objects from the rectum through the anus and avoiding laparotomy have been described [in the medical literature]... a bottle was removed with a loop from a wire coat hanger; a light bulb was removed by using two spoons as forceps; a turnip was extracted with obstetrical forceps; a drinking glass was grasped with rubber-shod forceps and then withdrawn; another drinking glass was filled with plaster into which a pair of forceps was implanted, and then the forceps were used as a handle to pull the glass out through the anus.


Comments
I brought up the concrete enema story to a proctologist friend of mine. He said he had removed so much foreign matter from people's backsides that it wasn't weird anymore.
Posted by crc on 08/10/16 at 08:13 AM
crc -- but the method of removal can still be weird. Or, at least, unique.
Posted by Alex on 08/10/16 at 09:38 AM
Related to these situations are the excuses that patients will give as to how the objects came to be lodged in place. My brother has been a X-ray technician for thirty years and he has seen a few. The most popular excuse is "I slipped in the shower."
Posted by KDP on 08/10/16 at 09:52 AM
Sick bastards!
Posted by RobK on 08/10/16 at 10:00 AM
I would be a hypocrite if I looked down at people who do this kind of stuff -- sadly, there's been many times I've acted like I've got my head up my backside.
Posted by Phideaux on 08/10/16 at 03:32 PM
One thing I learned along the way is that the difference between a brown-noser and a real shithead is depth of commitment. Another (which I was able to learn vicariously, thank goodness) is that you should never do anything that you don't care to explain to the paramedics.
Posted by TheCannyScot on 08/10/16 at 06:30 PM
After 30 years as a EMT the variety of objects inserted and then becoming stuck never ceased to surprise me. We stopped asking how it got there but rather what it was to ensure a safe transport. The biggest and most unusual was a brass fire nozzle, not the garden type, but 1.5 inch inlet and about 10 inches long.
Posted by Gator Guy on 08/10/16 at 09:06 PM
Apparently, the rectum is the holster that prison inmates use to carry a cell phone, when they can get their hands on one. They must appreciate the size reduction in phones over the years.
Posted by Virtual on 08/10/16 at 09:13 PM
By the way, this individual either had to be on active duty, or more likely, because of his age, retired from the military, to be able to use the LAMC facilities. I was stationed there in 1973-1974 as a laboratory technologist in the hospital, and we did not treat any civilians other than dependents of active duty and retired military. A complaint of being unable to have a bowel movement, even at the emergency room, would have resulted in his being redirected to a civilian facility.
Posted by Fritz G on 08/11/16 at 07:32 AM
Up yours buddy!
Posted by GFinKS on 08/15/16 at 09:54 AM
Commenting is not available in this channel entry.