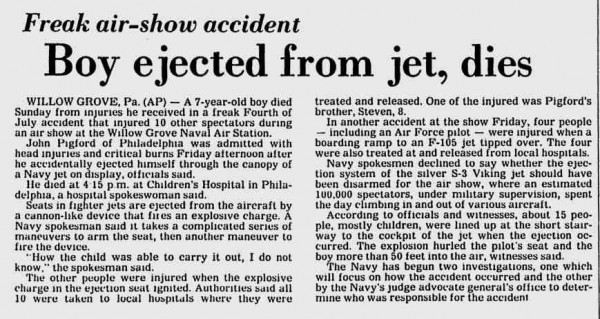 
Comments
What the hell! Why not leave some missiles on the rails too! :lol: :coolsmile:
Posted by Tyrusguy on 08/22/14 at 10:06 AM
The seat should have been disarmed, period! Some AME didn't do his job.

Anyhow, activating the ejection seat isn't THAT complicated it just (usually) requires two hands. In fact, it's so easy that some idion on the USS Shangri-La CVA38 left an imprint of his head in the overhead of the hanger deck. Some AME go burned on that one too.

The AME rating are the folks in charge of ejection seats and other sundried systems on our aircraft. My sea daddy was an AME.
Posted by Expat47 in Athens, Greece on 08/22/14 at 11:14 AM

The next generation of American spacecraft are undergoing development, and all of the partners will be carrying out pad abort tests, where the vehicle has to flee the scene in a hurry if the rocket decides to go boom and get the occupants to safety. Shuttle, of course, had no such capability -- in the event of an accident, they were to exit the vehicle on foot as quickly as possible and then take a zip-line to safety. But it's not the only American spacecraft that would likely kill its crew in a real pad emergency. Gemini was even worse. It had ejection seats as its only escape system. This made it great for spacewalks (since the ejection seats meant they needed huge doors over each seat) and gave them a method of escaping during descent, but meant that a pad abort triggering the ejection system would've surely killed the crew. Not only would they be ejecting too low for their parachutes to open, but they'd be ejecting *sideways* and slightly downwards, with the ejection seat rockets actually speeding their descent to Earth.

Fortunately, they never needed them.
Posted by Calli Arcale on 08/22/14 at 12:56 PM
Now that it is mentioned, the last few military air exhibitions I've attended had no cockpit tours in wither the small aircraft or the large transports. One was allowed to walk through the transport cargo area, though.
Posted by KDP on 08/22/14 at 01:39 PM
That is just tragic. The ejection seat should have been disabled if they were going to let civilians inside. The boy would be 34 now how sad.
Posted by Patty in Ohio, USA on 08/22/14 at 08:18 PM
Expat47, What is a Sea Daddy? Sounds sort of odd to me.
Posted by GatorGuy on 08/22/14 at 09:20 PM
Ah... A Sea Daddy is an old salt who knew the whiles of the sea that takes a young sailor under his wing and teaches him the the ways of the ship.