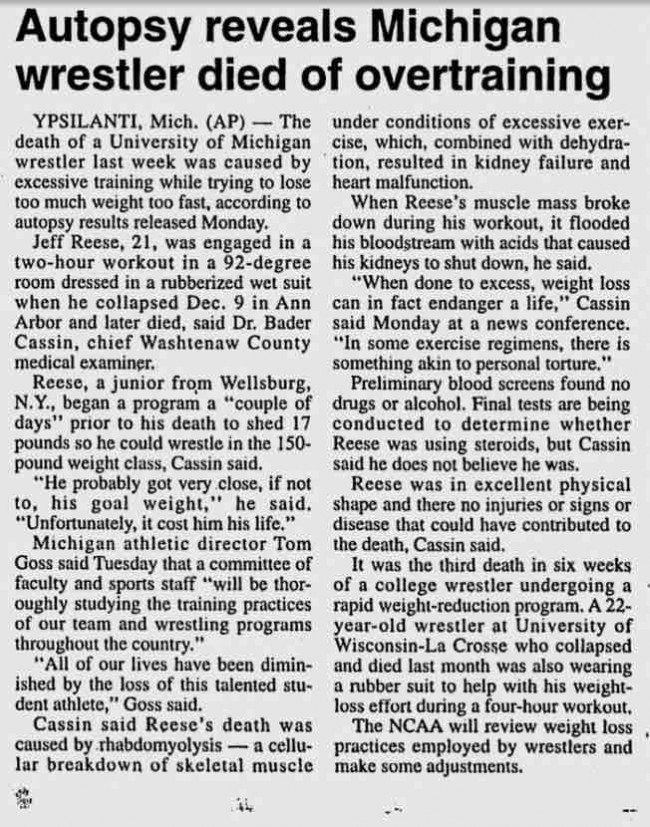 
Comments
I was going to make a comment about how no bench-warmer ever died of over training but SOMEONE out there may think that's racist. :coolgrin:
Posted by Expat47 in Athens, Greece on 04/20/16 at 08:52 AM
I see that this is reported in 1997. Some twenty five years earlier I tried to make the wrestling team at my school and the attitude toward trying to work in the lowest weight class possible was the same. As young as I was, I thought that was dangerous to anyone's health and I left the program.

Another factor was the rubber suit - I felt that only fetishists were the only ones who wore such apparel.
Posted by KDP on 04/20/16 at 11:16 AM

Same here, KDP. When we got within a pound or so of the class, we were encouraged to spit until we made it. 17# in a couple days is just a bit extreme, however; I guess you could make that by lopping off a limb. Wait, that wouldn't work out so well in wrestling, would it?

No one ever mentioned wearing a helium jock strap, but I wouldn't be surprised if someone has done that.
Posted by Virtual on 04/20/16 at 12:03 PM

I refer to these stories when the wife brings up the honey-do list.
Posted by GFinKS on 04/21/16 at 11:52 AM
Commenting is not available in this channel entry.