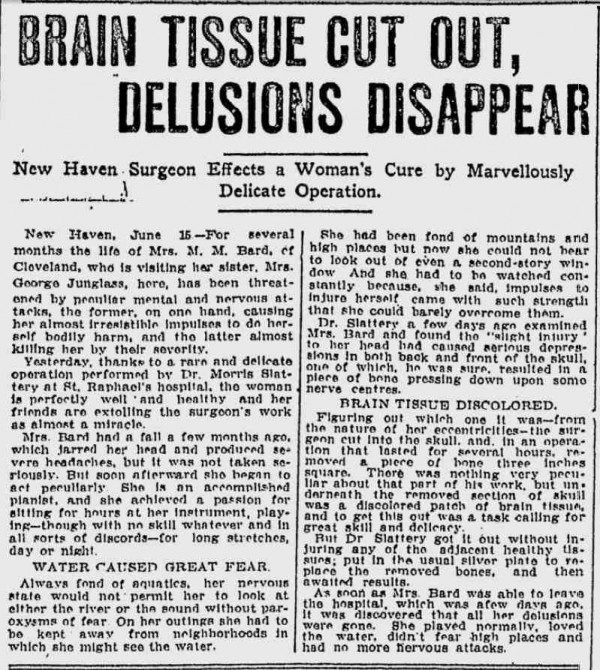 
Comments
Rather amazing for the time as Paul said. Makes me wonder if other odd behaviors didn't crop up since that part of the brain could have been responsible for other functions as well.
Posted by Patty in Ohio, USA on 07/20/14 at 09:51 AM
Personally, I'd've just thought it was typical hysteria brought on by THE CHANGE.
Posted by Expat47 in Athens, Greece on 07/20/14 at 10:28 AM
Brain surgery to relieve pressure after an injury is ancient tech. Offhand, I can think of only Peru where it was done a thousand years ago, but I'm reasonably sure the ancient Romans practiced it also.

@Phideaux - the tissue was certainly damaged but not necessarily dead. Brains are not protein-rich environments so dead tissue manifests as liquidative necrosis. Hope you're not having a snack as you read, and file it away under Useful Information For the Coming Zombie Apocalypse.

Sorry, Flamingo1, there was no 7,000BC the Earth is only 5,000yo as is proven by Scripture from The Holy Book.

Beelzebub has seeded our universe with fake artifacts in an attempt to seduce the weak and unbelievers into thinking that science has all the answers and the most preposterous idea that the whole of God's creation came from a single point and some kind of explosion.

REPENT NOW or the 'Flame' in Flamingo will last for all eternity for you.
Posted by Expat47 in Athens, Greece on 07/21/14 at 03:39 AM
Commenting is not available in this channel entry.