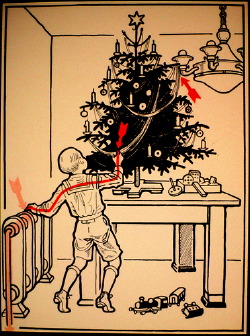 
Comments
HA HA! good one Patty. I think number 17 looks pretty painful, and number 30 has it coming to him. 26 looks like the boys rigged the door so no one would break into their pad. Reminds me of when I was a young lad, I used to spread my legos out in case any one broke into my room, they would have to walk over the legos and hurt their feet (it never occured to me at the time that anyone breaking in would be wearing shoes).
Posted by Silbakor in an altered state on 12/26/08 at 12:35 PM
They do seem silly...but I can imagine they might be necessary at a time when widespread electricity was new to a population. People wouldn't realize how it travels or conducts.
Posted by Maegan on 12/26/08 at 09:44 PM
CanUKgirl, you missed the fact that the baby sleeps on a circus net.

I think the thing in the baby's mouth is sort of like a universal cord. Somestuff may have had terminals and you had to plug this thing into an outlet and then the 2 parts on the other side would get attached to the terminals. As somebody has pointed out, the water heater on the table probably used this.
Posted by Madd Maxx on 12/27/08 at 08:30 AM

1: Forget Christmas trees, beware of bathtubs! According to this they were created just to electrocute people.
2: I knew I wasn't crazy for being scared of vacuuming the phone cord.
3: The guy whizing on the powerline is hilarious!
Posted by Matt in Florida on 12/29/08 at 12:53 PM

Isn't that a Ren & Stimpy song or something like that? *humming* Don't whiz on the electric fence....
Posted by Jules in Connecticut on 12/29/08 at 12:58 PM
happy happy joy joy happy happy joy joy
Posted by Jules in Connecticut on 12/29/08 at 01:03 PM
Matt, I'm sure you noticed someone's comments on Flickr, about the guy "peeing" on the power line. Judging from his expression and posture, I don't think that's urine.
Posted by kingmonkey in Athens, Ontario on 12/29/08 at 02:16 PM
Commenting is not available in this channel entry.