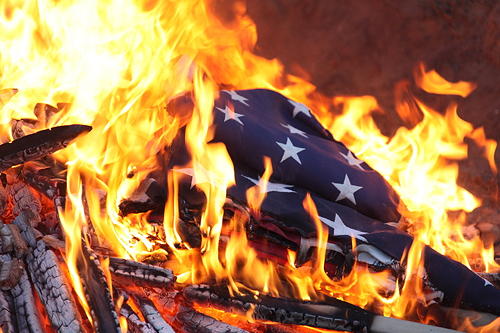 
Comments
It's ironic that people get so riled up about flag burning. Around here, the VFW has repurposed mailboxes that you're supposed to deposit worn-out flags in. Presumably they burn them when no one's around to get upset. I wonder how you're supposed to dispose of nylon flags.

I used to know a retired fireman who said people would leave flags off at the station to be burned. They would say they'd take care of it for them, then throw them in the trash when no one was around.

During my time as scoutmaster, I was given several worn out flags. We woul do flag retirement ceremonies at camp outs.
Posted by crc on 07/04/18 at 09:00 PM
Flag desecration statutes were held to be unconstitutional on freedom of expression grounds at least partly because of the existence of such etiquette rules. In essence, whether you could be prosecuted for flag burning depended on your stated reason for doing so. Pretty clearly a freedom of speech issue.
Posted by Frank P on 07/06/18 at 09:37 AM
At any rate, this worship of a piece of cloth does get a bit disturbing, from an outside POV.
Posted by Richard Bos on 07/07/18 at 06:17 AM
Commenting is not available in this channel entry.