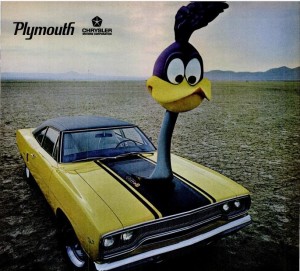 
Comments
The Plymouth Roadrunner was quite a car! They'd lowered the gear ratio to get more kick off the line. They built a few "Super Birds" so they could go racing.

http://www.goldenagegems.com/sitebuildercontent/sitebuilderpictures/1970PlymouthRoadRunnerSuperbird.jpg
Posted by Expat47 in Athens, Greece on 11/29/10 at 12:28 PM

I'd never drive a Volkswagen Beetle but if I did it'd be this one.

WARNING: The link is SFW but if you click on the picture to see the whole thing it's NSFW.

Noted KDP. Actually as a teen we had a guy who'd sell us pot and had a Beetle. We would all tell our parents we were going "around the block". The block was actually an hour road trip around three highways. We all get high and come away with our buys.

I told the kid to bring his father and we'd talk. The only time I tried NOT to sell a car and I blew it! The kid lucked out and walked away from the wreck that totaled the car a couple of weeks later.
Posted by Expat47 in Athens, Greece on 11/30/10 at 01:06 PM
I pass buy one of these things (get the pun?) going to rust every week on my way to my weekly "Cure The World's Problems Seminar". It's been a long time since I've seen one up and running though.
Posted by Expat47 in Athens, Greece on 12/01/10 at 04:22 AM
I'd forgotten about the VW Thing ... thanks for the laugh Mark.

then again, while the normal VW is all business and no flash, ones like this are all flash and no business, so it really isn't a big upgrade.


As for the Roadrunner, there may not be too many on the streets used as daily drivers, but there are still plenty in great condition on the show circuit. Muscle cars are extremely popular, and while there won't be as many Roadrunners as, say, Challengers, there are still a lot out there.

Fortunately (for my wallet at least), I've never been that crazy about muscle cars. I like full size sedans like the Chrysler New Yorker and Buick Electra, so when I finally do get around to buying a vintage car I'll be paying much less than someone buying a smaller, more desirable muscle car.
Posted by Salamander Sam in Chicago on 12/05/10 at 02:13 PM
Commenting is not available in this channel entry.