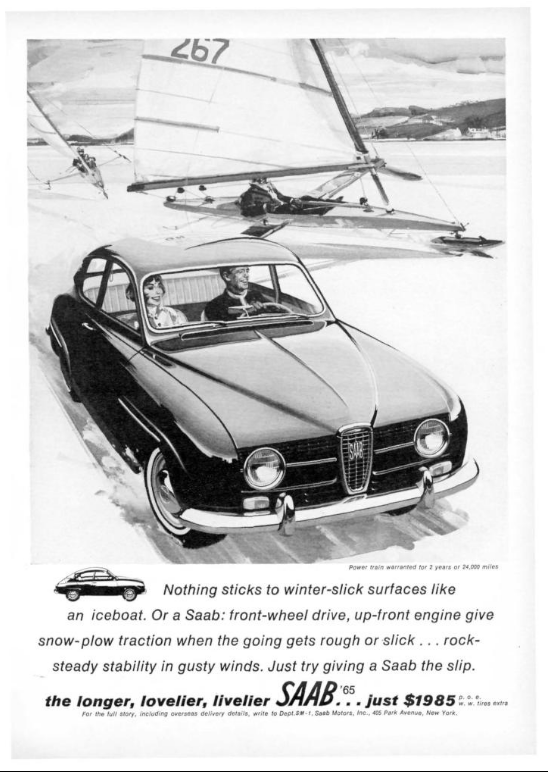 Comments
When this ad was placed, one of the lakes in the Twin Cities would have contests on who could dress up their ice fishing shacks the best. The local county would use their multi-ton snow plows to create "roads" on the lake to get to the "shantytowns" of fishing shacks. We also had raced of ice-boats. But this was a Scandinavian-based area, and Volvo is a Scandinavian-based car company.

And really, front-wheel drive (which wasn't a thing for Detroit except for one weird car from Plymouth) reall IS better on the ice than rear-wheel dive because the driving and steering wheels are under the weight of the engine which makes for better traction.


Paul should have done alittle bit of research about driving on frozen lakes in Sweden in the winter. Maybe then he wouldn´t have made a fool out of himself by commenting on this ad in the way that he did.
Posted by F.U.D. in Stockholm on 09/23/19 at 01:50 AM
"Honey, I think the GPS got it wrong again!"

agent j
Posted by agent j on 09/23/19 at 08:53 AM
Respectfully, F.U.D: this is an American ad for a Swedish car. Nothing indicates the scene depicted takes place in Sweden, and in fact the publication venue makes one assume it takes place in the USA. Statistically speaking, the number of ponds and lakes which freeze enough to support an iceboat but NOT a car is probably much greater than the number of ponds and lakes which freeze solidly enough to support both. The ad gives no evidence of the solidity of this ice by showing other structures or multiple cars, and so statistically speaking, it's probably representing an unsafe condition more likely than a safe one.

In any case, this is all dissecting a rose with a sledgehammer, considering the silliness level of my original comment.
Posted by Paul on 09/23/19 at 09:37 AM
AFAIK there are ice roads in the USA.
Posted by Heikki on 09/23/19 at 11:03 AM
Roads? We don't need no stinkin' roads! Enough people in Minnesota drive on ice that the state put up a guide: https://www.dnr.state.mn.us/safety/ice/thickness.html

I grew up near a 30K acre lake (over 20 miles long). Since time immemorial, one of the rites of passage was to go to one of the little-bitty bays, drive down the hill as fast as you can, across about 100 feet of ice, and up the other side. Totally illegal, state police always preached against it, but only once did I ever see the roads barricaded so no one could try it.
Posted by Phideaux on 09/23/19 at 05:17 PM