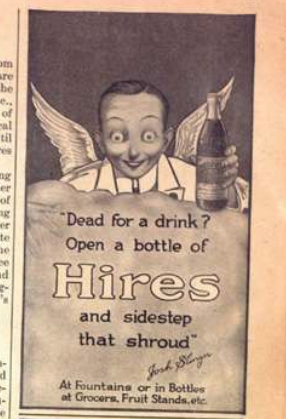 
Comments
My surmise that this was from the Prohibition era was incorrect: it's from 1915.
Posted by ges on 06/14/22 at 05:21 PM
I do believe the product is Hires root beer. I also believe it is readily available today to help sidestep the "shroud"...
Posted by Teri on 06/15/22 at 12:10 AM
ges: Not from the Prohibition era, but definitely from the Temprance Movement Era, which began many decades earlier. Just FYI, while Prohibition did not work, it did have some benefits, such as ushering in minimum legal drinking ages, and laws against drunk driving. Before Prohibition, anyone of any age could go into a saloon and get alcohol, and some children did. Also, a big and largely forgotten part of the Temprance Movement was feminism, which advocated sobriety for husbands so they wouldn't get drunk and beat their wives.