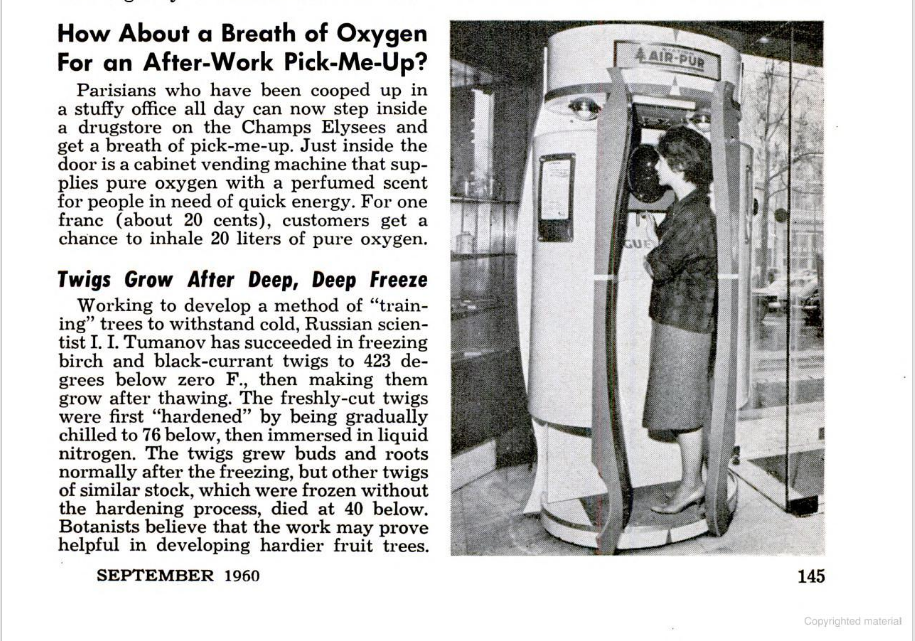 
Comments
Oddly enough, it resembles the street toilets that appeared some twenty years later. Don't laugh, they were actually practical, fairly clean and could be used by both sexes, unlike the pissoirs that had been placed on the streets previously.
Posted by KDP on 06/14/20 at 08:28 AM
https://www.gettyimages.com/detail/news-photo/young-japanese-girl-takes-a-whiff-of-pure-oxygen-from-the-news-photo/830319868
Posted by ges on 06/14/20 at 09:29 AM
I think you'd have to check with a good lawyer before offering that here. Oxygen is considered medicinal -- you need a prescription to get either oxygen concentrators or those small tanks of O2 which many senior citizens use. A few years ago, the local supplier of industrial (welding) gases went around and had companies sign off that they wouldn't let people breath from the oxygen tanks in their possession. Even the aviator gas which was popular among sports/exercise enthusiasts a few years ago has hit some legal challenges and is getting harder and harder to find.
Posted by Phideaux on 06/14/20 at 01:39 PM
That's easy to fix; just replace the pure oxygen with a mix of 30% oxygen and 70% nitrogen and write some disclaimer on the machine. And for the love of God, keep your stinky perfume out of the oxygen mix!
Posted by Yudith on 06/15/20 at 06:44 AM
I prefer nitrous oxide.
Posted by Virtual in Carnate on 06/15/20 at 12:36 PM
Isn't inhaling pure Oxygen unhealthy? IIRC the body still needs other gases as well. 😊
Posted by not_a_cat on 06/19/20 at 10:42 AM
Commenting is not available in this channel entry.