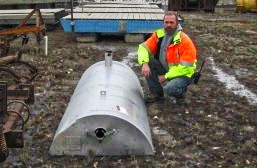 If you've ever wondered how they bury people when the ground is frozen solid, this is how. Or they jack-hammer the earth for hours. But this is the preferred method. More info here.

I guess in the old days they would store the body in a shed and wait until the ground thawed. That works also.


Comments
This sounds like it could be a song by JOHN PRINE! :lol: :coolsmile:
Posted by Tyrusguy on 01/17/14 at 09:36 AM
That's where the technical term "corpsicle" came from, Alex.

And any right minded left wing tree hugging eco-nut would cringe at the thought of burning any more fossil fuel, thus increasing his/her carbon footprint, after his/her demise.
Posted by Expat47 in Athens, Greece on 01/17/14 at 09:37 AM

They have a beautiful old addition to our local midievel church here where they used to store the caskets when the ground was frozen. Nowdays they just warm the ground as in the above Picture.

That thing looks like it'd be good to use as a bbq while you are warming the earth.

Just, uh, don't use it for that purpose after the body is in the ground.
Posted by Fluffy Bunny Slippers on 01/17/14 at 06:24 PM
It makes sense but it never would have occured to me. A backhoe would work too.
Posted by Patty in Ohio, USA on 01/17/14 at 07:39 PM
Apparently, the Inuit lay their dead out on the tundra and then stack a bunch of rocks on top to form a cairn (to protect it from animals, which didn't always work).
Posted by Fluffy Bunny Slippers on 01/17/14 at 10:45 PM
When I worked for a company which built hydraulic cylinders, we repaired or replaced cylinders every winter on the backhoes the local cemeteries used to dig graves. When we outfitted one with larger, much more robust hydraulics, it rarely came in again, but the welding shop across the road was always fixing the bucket.

Breaking through frozen ground is worse than busting up concrete -- concrete is uniform, frozen dirt has pockets which act as shock absorbers; concrete is rarely more than 6 inches thick, the ground can be frozen to two feet down; and once you can get under an edge, you can lift and break out big chunks of concrete, but dirt shatters at the point of lift.

I remember reading of settlements where in the fall they'd dig as many graves as they thought they might need during the winter.

Can you imagine the pressure if someone dug a grave for you next to your deceased spouse? Would the community's leaders think you're not a team player if you lived through the winter? If food or medicine ran short, would they cut back on your rations because they already did all that work preparing for your death?
Posted by Phideaux on 01/18/14 at 05:28 AM
After Dec 31, 1999 there were a lot of headstone carvers scrambling to fix the "19" that was pre-carved in anticipation of a grave event.
Posted by Expat47 in Athens, Greece on 01/18/14 at 05:36 AM
I have seen a D8 Cat lift it's back end on a single ripper tooth and barely scratch the surface on the first few passes. It was in a peat bog which made it Pykrete.
http://en.wikipedia.org/wiki/Pykrete
Posted by BMN on 01/18/14 at 04:15 PM
Wow.

I actually work as a stone mason and this is something that I have never before encountered. I guess I hadn't ever really considered how people are buried when the ground is frozen - but just because it's cold outside doesn't mean that people suddenly stop dying! Nice little eyeopener.
Posted by Jason Addison on 03/11/14 at 12:34 AM
Commenting is not available in this channel entry.