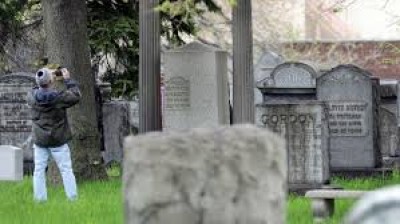 
Posted By: patty - Wed May 13, 2015
Category: Buildings and Other Structures | Culture and Civilization | Industry, Factories and Manufacturing


Comments
There's still an up & running factory in Detroit? Now, that's weird!
Posted by Expat47 in Athens, Greece on 05/14/15 at 12:47 AM
There is a cemetery just inside the Y-12 Security Complex (yes, the nun break-in place) that is restricted access.
Posted by crc on 05/14/15 at 09:42 AM
During my first trip to France as a student, I was placed, along with a fellow student, with a host family. They lived on a very small family farm. held by the family for centuries, and my first evening there we were taken on tour. In the yard area just back of the house I noticed a few long stones that resembled grave markers. Turns out that, centuries before, the family had followed the Protestant faiths and were not allowed to bury their dead in the main Catholic cemeteries. They were allowed to bury them at their homes.

When my fellow student traveler asked if there were more and where they bodies were buried, our host replied, "You're probably standing on one."
Posted by KDP on 05/14/15 at 09:58 AM

Interesting, Thanks for sharing it. Modern day grave robbers scout out abandon cemetery's to search for jewelry of the deceased. But according to a great Uncle who was from a long line of undertakers, frequently the family would request such valuables be removed discretely as the casket was closed so the survivors could profit, or at least pay the bill. When he got into his cups, he had a number of unprintable stories about funeral homes he would tell me and my other cousin.
Posted by Gator Guy on 05/14/15 at 06:03 PM
Sammy Davis Jr was buried with $70,000.00 worth of jewellery When his wife found out he owed Millions in back taxes, she had him exhumed..
Posted by BMN on 05/14/15 at 07:16 PM
Commenting is not available in this channel entry.