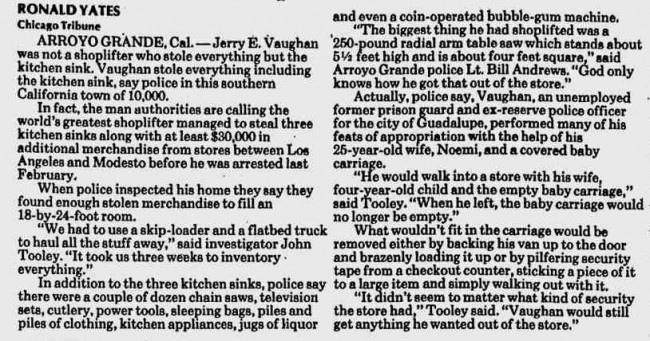 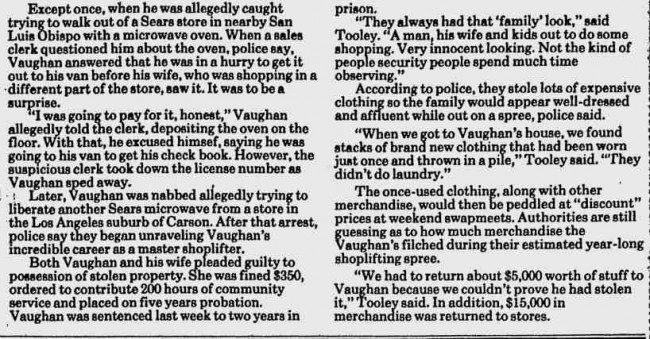 Southern California in the early 1980s was something of a haven for bank robbers -- if the tellers didn't recognize you, you weren't caught in the act, and you did it only once, there was virtually no chance they'd ever nab you.
Posted by Phideaux on 11/29/15 at 04:08 PM

@Phideaux: Back when I was in the money game we figured one needed about $15M net to get away clean. New identity, new home in non-extraditable county - no more working ever (under the radar).

Then, there was a time in CA where you had a 70% less chance of getting caught if you killed all the witnesses PLUS the extra jail time with murder tacked on wasn't that much more with time off for good behavior, early parole, etc.
Posted by Expat47 in Athens, Greece on 11/30/15 at 12:56 AM

@Expat -- If you're moving to a non-extradition country, why would you need a new identity?

At today's interest rates, $2,000,000 will bring in $60,000 a year (anonymous trust holding 30-year Treasury Bonds). That's a very comfortable living in most non-extradition countries, especially since you don't have any work expenses.
Posted by Phideaux on 11/30/15 at 01:30 AM
Without the new identity you could be tracked down by bounty hunters and other nefarious politicians that would be coming into power in later years that weren't in on the original bribe you paid to get into the country off the books.

That $2M you're referring to is not that far off the amount you'd have had after all the bribes, secret travel, new ID, new physical appearance, etc.

Remember, this was back in the late 70's early 80's when international travel was pretty easy and electronic surveillance was almost non-existent. So, if we'd've done the study today you'd, most likely, have to boost that net figure up by, at least, double if not triple.
Posted by Expat47 in Athens, Greece on 11/30/15 at 01:39 AM
Unless you've gone really overboard in the high-profile department (like stealing $30M from the Koch family or committing mass murder), you won't have to bribe anyone. Countries like the Republic of Cabo Verde or Croatia welcome anyone who can bring in hard currency.

As long as you're at least a state or two north of the border, you can drive to El Paso, board a bus, and cross into Mexico -- they'll glance at your passport, but unless you're acting really strangely, they won't check it against the watch list (if you live in a border state, there's a chance the immigration official will have heard your name on the news, so you'll have to head for Canada instead). Once there, you can fly out of Mexico City without anyone caring. Yes, there's a fancy electronic alert system, but unless you're the subject of a massive manhunt by the Feds, your name will be buried in the literally thousands of watch notices issued each day.

If you're manic to have a new identity, dip into the dark web. The last I heard, you can buy a driver's license, debit card (useless but looks authentic) and passport (won't pass electronic scrutiny, but good enough at most non-US airports) out of Miami for the grand cost of $500. (Just a driver's license and debit card are sold in sets of six for $500.)

Assuming this was planned and not a crime of opportunity, you'll surely have made prior arrangements with an attorney in Lichtenstein. Before departing, FedEx him the cash. He'll buy 30-year US Treasury Bonds for an anonymous trust, open a bank account for you in your destination city, and arrange an appointment with a local attorney to handle your request to become a resident alien. Usual fee for all this is 10% (with a $50,000 minimum) and a 2% of the income handling fee each year. They can also book you into a good hotel and recommend a decent real estate agent.

(In case you're wondering, yes, I've thought about and researched this a lot!)

If Edward Snowden can bop around the world without boatloads of money, a simple thief won't have any problems at all if they've thought it through and planned ahead. Thousands of people disappear from the US every year. You'd have to have really gotten up someone's nose before the cops would do more than a perfunctory search. Stealing a couple of million, you won't even be a blip on their radar.
Posted by Phideaux on 11/30/15 at 04:33 AM