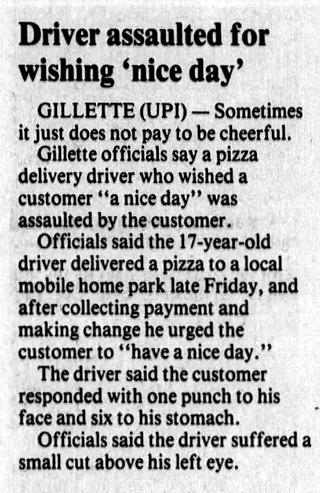 I bet he delivered that pizza, then got himself into a fight with another teenager (possibly, but not necessarily, from that same trailer park or his own school), and blamed it on the "white trash".

Not denying that white trash exists. I live near some. But the kind of teenager who gets in trouble with them is more than likely trash itself, as well.
Posted by Richard Bos on 10/24/20 at 09:00 AM


Oh, and @Phideaux: so do I. But I don't go on with six punches to the stomach. That'd take effort, which I don't want to spend at that point.
Posted by Richard Bos on 10/24/20 at 09:04 AM
As a security guard/receptionist I had one guy who angrily threaten to punch me out for calling him sir.
Posted by Techs on 10/25/20 at 06:17 AM
Commenting is not available in this channel entry.