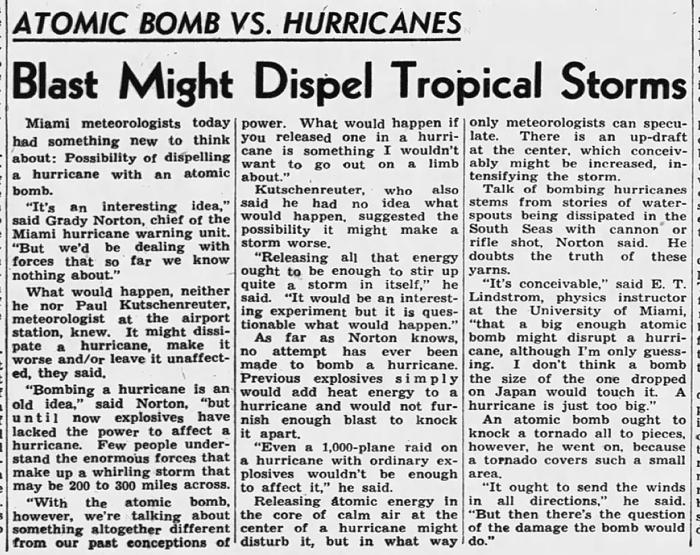 
Comments
I read a proposal based on what was known at the time (late 1960s? very early 1970s?). It called for multiple small atomic sub-surface explosions in a ring around the hurricane. The idea was, irrc, hurricanes form because of hot water and cold winds, so adding areas of hot water around the perimeter sidetracks the cold winds. You'd be doubling the amount of energy in the storm but squaring its area.

Whoever wrote the proposal lamented long and hard how the government had made it impossible for researchers to use even small nukes in their experiments -- how do you expect people to do their jobs if you don't let them have the tools they need?
Posted by Phideaux on 09/15/19 at 02:10 PM

There were also proposals to use nuclear devices for excavating long connecting canals across land between oceans. I don't think that would have been a good idea.
Posted by KDP on 09/15/19 at 07:51 PM
Russians were actually the best with Peaceful Nuclear Explosions (PNEs). Bombs used in their "Nuclear Explosions for the National Economy" program were much cleaner than American-designed bombs for "Project Plowshare." The one used to create Lake Chagan (sp?) was clean enough that people fish and swim there with no ill effects.
Posted by Phideaux on 09/15/19 at 10:20 PM
Russians also said that the Chernobyl incident was tiny enough that people fish and swim nearby with no ill effects. Also, what Chernobyl incident?
Posted by Yudith on 09/16/19 at 06:10 AM
Commenting is not available in this channel entry.