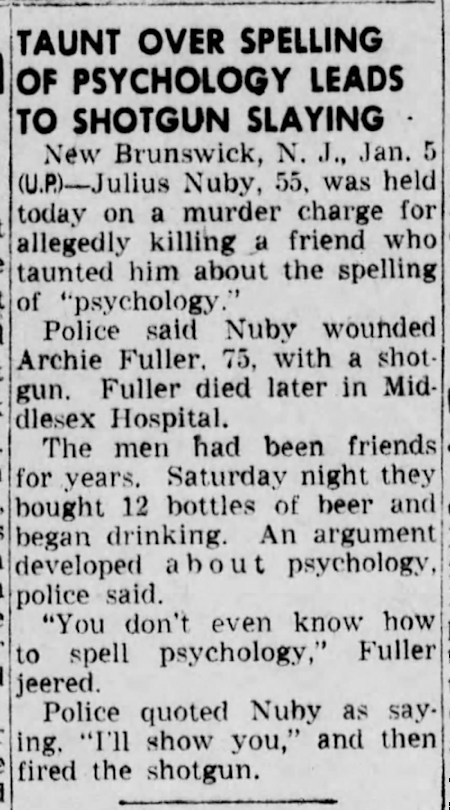 Taunt Over Spelling of Psychology Leads To Shotgun Slaying
New Brunswick, N.J. Jan. 5 (U.P.) — Julius Nuby, 55, was held today on a murder charge for allegedly killing a friend who taunted him about the spelling of "psychology."
Police said Nuby wounded Archie Fuller, 75, with a shotgun. Fuller died later in Middlesex Hospital.
The men had been friends for years. Saturday night they bought 12 bottles of beer and began drinking. An argument developed about psychology, police said.
"You don't even know how to spell psychology," Fuller jeered.
Police quoted Nuby as saying, "I'll show you," and then fired the shotgun.


Comments
And I always wondered why gun laws were some of the most restrictive in NJ. It's like CA east.
Posted by BrokeDad in Midwest US on 03/06/16 at 08:32 AM
I understand the situation... Having survived the war they lost the their last shred of sanity when they were forced to live in NJ.

Each had been recruited by rival mob families and, unbeknown to each other, were both given orders to rub out the other. Julius the Squeeze fulfilled his obligation.