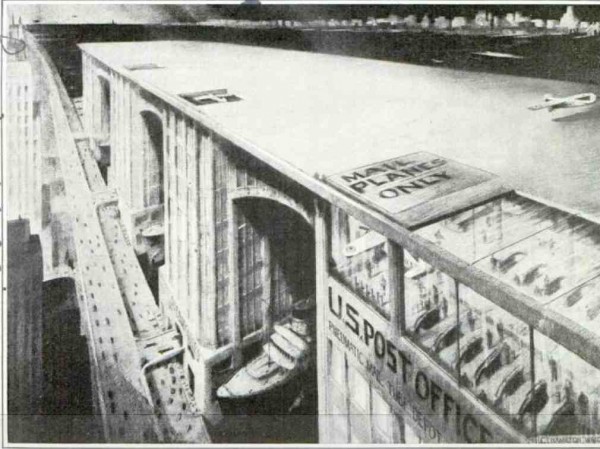 
Comments
Anyone with ½ a brain could have told you that this idea would never, ever, under any circumstances come to fruition. It was way to intelligent and labor saving for any left minded unionist to be able to support. Why, just think of all the jobs that would be lost if goods could be transferred in a matter of minutes instead of days???

The future ain't what it used to be.

It looks like either a design drawing for "Sky Captain and the World Of Tomorrow" or a National Lampoon parody.
Posted by KDP on 06/04/13 at 10:49 AM

KDP--you are thinking of the work of the great Bruce McCall, who drew his inspiration from this stuff.

http://en.wikipedia.org/wiki/Bruce_McCall
Posted by Paul on 06/04/13 at 11:07 AM
Yes, Paul. I was thinking of the R.M.S Tyrannic (White Star parody) when I saw the steamship parked inside the building but not so along the line of the artist's name.
Posted by KDP on 06/04/13 at 03:42 PM
Yes but did they plan to issue special "valet keys" :shut: (Inside joke for Patty)
Posted by BrokeDad in Midwest US on 06/04/13 at 05:55 PM
Yeah, they are telling us that the use of a valet key caused the security system in hubby's car to shut it down. (won't start.)

It does favor the style of 'Sky Capatain and the World of Tomorrow'.
Posted by Patty in Ohio, USA on 06/04/13 at 09:53 PM
Commenting is not available in this channel entry.