Mathilda, a white leghorn chicken, was pushed into a five-gallon glass jug by her owner, Henry Willis, minutes after she emerged from her shell. She then grew into an adult chicken in the bottle, and became known as Mathilda the Bottled Hen of Denver. This was back in 1936.

Willis said he bottled her as part of an experiment to control her diet, though many scientists said they couldn't see any value in such an experiment. Animal rights activists were outraged and pushed the state bureau of child and animal protection to intervene. But ultimately the state authorities didn't do anything because, according to the DA Earl Wettengil, "this appears to be a scientific investigation which justifies the facts."

So as far as I know, Mathilda remained bottled for her entire life. 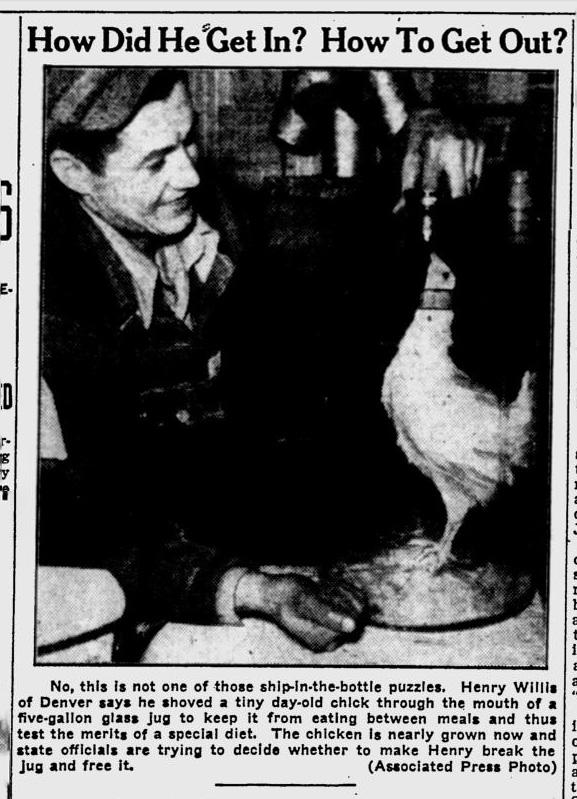 The Evening Independent - Feb 28, 1936
Putting hens in bottles must have become a bit of a fad, because I found a picture of a second hen bottled a year after Mathilda.


Comments
It's a wonder Matilda didn't surcome to asphixiation from her droppings. The stuff is fowl!
Posted by Expat47 in Athens, Greece on 08/08/14 at 09:42 AM
I imagine he also tortured animals as a Child.
Posted by F.U.D. on 08/08/14 at 10:40 AM
It is actually a lot better than the accommodations for animals on many factory farms these days. Not like the old days.
Posted by Harvey on 08/08/14 at 11:21 AM
I call shenanigans. Expat is right; the inside of that bottle would have been filthy.
Posted by Frank on 08/08/14 at 12:44 PM
Those birds are pretty well filled out despite spending an extended time in such confined spaces. I call B.S. Such stories are worthy of the old Weekly World News, may it rest in peace.
Posted by KDP on 08/08/14 at 03:17 PM
I agree that this is fake. Yes there are ways to get the poo out of the jar, but the bird should be covered with it. The snow white shed feathers on the bottom show no trace of poo but can hide a hole cut in the bottle.

For those of you who were not raised on a farm with chickens; shoveling chicken poo stinks more than most politicians BS.
Posted by BMN on 08/08/14 at 04:18 PM

You guys are right, its fake. And yes, chicken poo STINKS!
Posted by Patty in Ohio, USA on 08/08/14 at 07:47 PM
Hate to burst anyone's bubble, but in the 1920s and 1930s, it was uncommon but hardly rare. It was in newsreels every so often as either 'crazy farmer' or 'nutritional research.'

You put sand in the bottom, both for grit and because a chicken can't stand decently on curved glass. The poop binds to it and dries out enough to delay decay. Dump that out every couple of days, reach in with a long-handled brush (if necessary), and refill.

A lot of the ones done for real scientific research had an opening cut in the side of the bottle so the bird could stick its head out to eat, making it even easier to keep clean.

It's only when chicken poop sits for more than a few days does it begin to decay, which is when it starts to stink (ammonia, sulfur compounds, etc.).
Posted by Phideaux on 08/09/14 at 12:45 AM