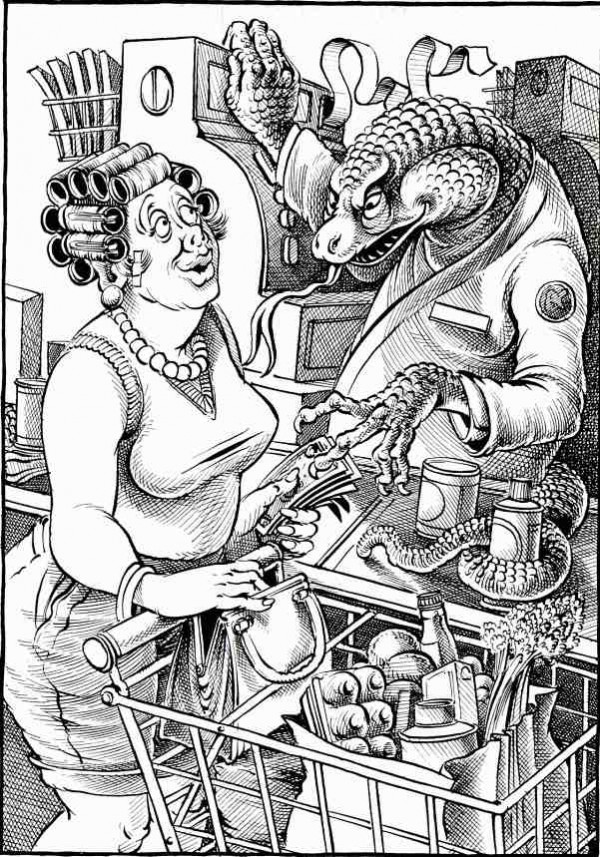 Comments
Interesting read, Paul, but I found it a bit hard to swallow. Oh, don't get me wrong, the stunts the guy pulled are/were ligit enough and I'd guess that they've reinvented themselves to keep up with the times (like steal all the rounding amounts from accounts) but, really, who names a lizard "Billy"? :lol:
Posted by Expat47 in Athens, Greece on 08/13/14 at 09:43 AM
So, she's got celery, but her underwear aren't going to fall down?
Posted by TheCannyScot in Atlanta, GA on 08/13/14 at 10:31 AM
The illustration is good for the story. Number five could have applied also if you stretch it a little. I came away from the story with this:

The article is from 1974, just as the barcode tagging systems were being developed for general retail use. The cheating method of holding the drawer slightly open to keep the register in input mode was revealing. My experience with computing equipment leads me to say that the methods described here of shifting charges from one customer to the following customer won't work anymore.

I haven't worked in retail for many years, but I'm sure there are workers who try to game the system even now even with the machinery as sophisticated as it is.
Posted by KDP on 08/13/14 at 11:01 AM


Cash registers were originally invented partly as a way for storekeepers to keep watch on their clerks' honesty. If the tally recorded by the machine at day's end didn't match the money in the drawers...

Sounds like Billy was an ancestor of today's computer hackers.
Posted by Phred22 on 08/13/14 at 03:45 PM
I hate to hear that stuff. I am a cashier and it makes people distrustful of everyone due to a few bad eggs.
Posted by Patty in Ohio, USA on 08/13/14 at 08:46 PM
The things you could get away with before computers and video surveillance. :lol: :coolsmile:
Posted by Tyrusguy on 08/14/14 at 12:13 PM
Lyndon LaRouche's theory of Space Lizards was my guess.
Posted by Virtual on 03/29/18 at 10:37 AM
Commenting is not available in this channel entry.