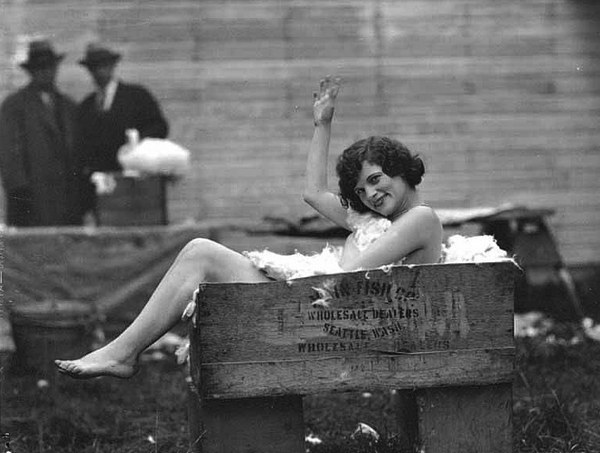 
Comments
That's a girl, wrapped in fur, inside a fish box!
Posted by Expat47 in Athens, Greece on 01/18/13 at 02:42 PM
This is truly an historic photo. It documents the fate of the last Angorra Rabbitfish, now extinct!
Reportedly it tasted like chicken, smelled like tuna, and was as fuzzy as a bunny.
Posted by tadchem on 01/18/13 at 03:03 PM

Are we sure that there isn't some murder mystery story with this title?
Posted by KDP on 01/18/13 at 04:17 PM
It's a police photo after they busted a ring smuggling showgirls.

A boat would pick them up in L.A., pack them into crates (the fur is simply padding so they wouldn't get bruised during transport), and bring them into the port at Seattle disguised as boxes of fish.

Where's the PETA "I'd rather be naked than wear fur" comments?
Posted by Vern on 01/19/13 at 03:34 PM
Commenting is not available in this channel entry.