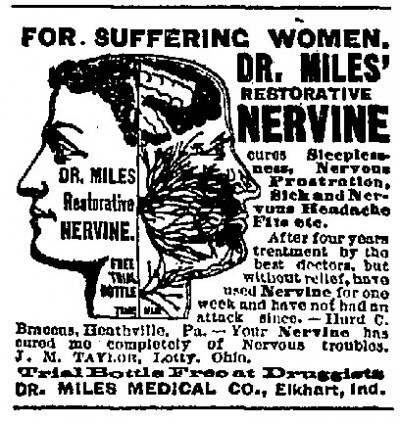 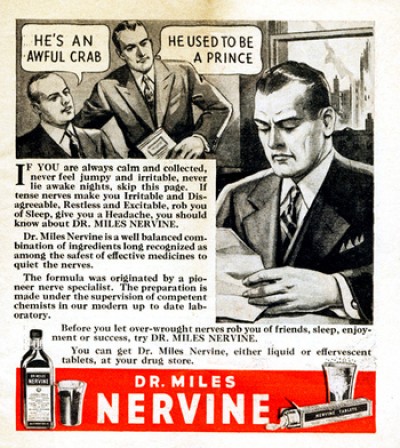 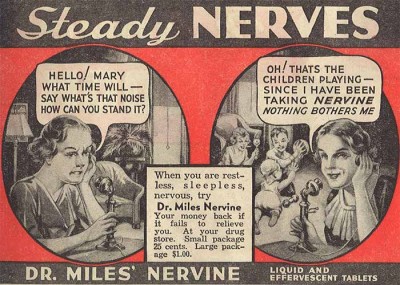 Comments
I give my dog KBr (potassium bromide) to treat her seizures. It was used to treat people for epilepsy until other meds were developed.
Posted by ScoutC on 11/16/14 at 09:36 AM
Nervine, the drug that launched a thousand Bromides! :lol: :coolsmile:
Posted by Tyrusguy on 11/16/14 at 09:42 AM
The Helpful Concoction.
Posted by Expat47 in Athens, Greece on 11/16/14 at 10:45 AM
Here's some more info:
http://maryfransmuse.weebly.com/dr-miles-laboratories.html

Yep, like ScoutC and Tyrusguy said, it's a sedative. http://en.wikipedia.org/wiki/Potassium_bromide
Posted by Kyle Morgan on 11/18/14 at 07:52 AM

Unlike heroin and cocaine, Miles Nervine was available relatively recently. I remember the ads from when I was a kid. My father, who graduated from pharmacy school in 1928 or thereabouts, used to sell heroin (but I think it required a prescription).
Posted by ges on 11/19/14 at 07:02 AM
Nervine was a wonderful elixir . No home should be without it. Unfortunately we can no longer get it. It worked wonders for nervous prostration and just plain fidgety nerves. Another thing we cant get now is that medicine for leg cramps. Anything we could get that was good is long gone. We even could get paragoric for general malaise.
Posted by Stephen Bendavid on 09/16/16 at 02:46 AM
Since Stephen resurrected this thread, I want to correct my statement from almost two years ago. I said my father used to sell heroin as a pharmacist, but I read that heroin became illegal in 1922 even when used medicinally. Maybe he told me that he remembered when pharmacies sold heroin.
Posted by ges on 09/16/16 at 10:51 AM