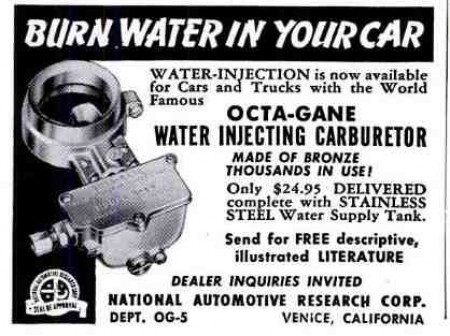 Comments
Water injection does improve mileage and power, but I don't see how a one-size-fits-all version could be expected to give good results.

In the 1970s, there was a magazine article which showed how to do it. I gathered the requisite vacuum tubing, windshield washer tank, aerator, and valve (the last two from an aquarium). It took most of an afternoon to build and install in my pick-up. Had to make minor adjustments (how much the valve should be open) over the course of a month. It gave a little boost on mileage and really improved power!

But it was a hassle keeping the tank full, and so after I removed it for the winter, it never got reinstalled.
Posted by Phideaux on 12/31/14 at 09:14 AM


I don't understand how this would work but I don't doubt you Phideaux.
Posted by Patty in Ohio, USA on 12/31/14 at 09:47 AM
Wouldn't snake oil burn better with less hastle?
Posted by Expat47 in Athens, Greece on 12/31/14 at 10:33 AM
That was my original thought too.
Posted by Patty in Ohio, USA on 12/31/14 at 10:58 AM
Here is a better explanation.
en.wikipedia.org/wiki/Water_injection_(engine)
Posted by BMN on 12/31/14 at 11:08 AM
As I understand, water injection affects the combustion process by cooling "hot-spots" in the cylinder, which in turn reduces the amount of pre-detonation (pinging) that was prevalent in automobile engines in the carburetor era. For those of you too young to know, carburetors delivered fuel to a cylinder only through suction as the intake valve of an individual cylinder opened. Delivery at the correct mix of 14 to 1 was actually an average depending on airflow. The balance struck was usually to set the mixture a little rich to help cool the hot-spots (usually due to carbon deposits) and avoid pinging due to a lean mixture.

In a modern engine management system fuel injectors deliver the correct amount of fuel to each cylinder, directly behind the intake valve, on demand. It is a rarity to hear pinging in a modern gasoline engine.

As for the perceived power boost, I would chalk that up to a placebo effect. Sorry, Phideaux, but I've always pointed out that if these devices are so good, why don't the auto manufacturers put them on their cars in the factory?

I knew the inventor personally, and he had some heavy hitters helping him, former governor Jim Rhodes for one.

It didn't get to the "what is it going to take to manufacture" stage as far as I know. But then, I knew of him after he had developed the fuel system, I just know some of the tales.
Posted by Not Now on 12/31/14 at 11:59 AM
Most of those things really are bought out and shelved. Thanks for the explanation KDP, even I understood it. :lol:
Posted by Patty in Ohio, USA on 12/31/14 at 01:06 PM
They didn't talk about the main 'side effect' - namely reduced engine life.

The problem with E10 and other fuels that include alcohol is that alcohol draws moisture (water) out of the air. Ask any boat owner who has used the mandatory alcohol-based fuels for any length of time. They destroy the engine.
Posted by tadchem on 12/31/14 at 01:14 PM
@KDP -- I can assure you the effect was real; I knew the water tank was empty when she lost that extra pep. I went to the trouble to put it on my pick-up because I knew planes in WWII used it because of the extra power it provided.

GM installed it on an at least one Olds (F85?). I don't know how many other makes or models had it. I'm sure there were a few.

I think it wasn't used more because of cost and hassle:

Companies spend millions every year trying to find new ways to sell cars and millions more searching for ways to save pennies on each one they make. The benefits of water injection didn't sell enough more cars to justify its cost on each vehicle.

Drivers found it a hassle, as I did. Stations didn't have water available at the pump, so you couldn't fill the tank when you filled the gas tank. The extra effort required wasn't worth the few pennies it saved at the pump (gas was a lot cheaper then), and if a new car buyer wanted more power, they could opt for a bigger engine.

The water tank on mine had a crust on the inside after only six months. I can't imagine what it'd be like after a few years or how the average driver would clean it.

These factors really limit its use to engines where even small fuel savings are important, extra power without extra weight is important, and more maintenance isn't important, i.e. airplanes where fuel is precious, power is essential, and no one cares how hard ground monkeys have to work.
Posted by Phideaux on 12/31/14 at 05:13 PM
@patty -- One factor (of many): the basic principle of engine operation is that hot air expands; this expansion pushes the piston down. Water vapor turning into steam expands much more than air. Adding water vapor simply means that what goes into the cylinder can expand more, providing more power for the amount of fuel used.

It's a delicate balancing act because turning water into steam means the air expands slightly less because it doesn't get as hot. Fortunately, gasoline engines have lots of waste heat.
Posted by Phideaux on 12/31/14 at 05:49 PM
@patty = expanding hot air ... 'nuff said (see husband mouth or under blankets)
@Expat = please let the baby new year hostage go now as it is over there soon
@Phideaux = gas here today was $1.89/gallon .. YEAH !!
@KDP = Have you stopped beating your wife for one minute or minuet ?
Posted by BrokeDad in Midwest US on 12/31/14 at 06:35 PM
Anyone else remember gas wars? 29.9 would suddenly become 26.9, then 22.9 then 19.9. 12.9 happened occasionally. Everyone talked about 9,9, but no one ever did anything about it.

When I began driving, $5 would fill the tank with enough left over to buy a Coke and a pack of cigs.
Posted by Phideaux on 12/31/14 at 07:46 PM
Water injection was used with some very high performance aircraft engines to prevent denotation through cooling. A higher octane fuel was one solutions.

Over the last 50 years I have seen numerous fuel economy devices come and go including several reincarnations of the water injection devices. Best solution is to buy a smaller vehicle,drive slower or reduce the weight in your vehicle. On a highway trip a cruise control set at a reasonable speed will increase fuel mileage. On one trip I used my EB-6 manual aviation flight computer to compare my cruise control driving to my spouses manual throttle control, she thinks the CC is a tool of the devil. Yes I came out ahead but she still ignores the cruise control.
Posted by Gator Guy on 12/31/14 at 09:15 PM
Thank you Phideaux. BD, I want nothing to do with the expanding hot air hubby produces under the blanket! :sick:
Posted by Patty in Ohio, USA on 12/31/14 at 09:39 PM
@Gator Guy -- I recently traded my 307 V-8 for a 2-liter Inline 4. Surprising little difference in power when I need it (maybe because this SUV weighs less than the Buick Le Sabre it replaced).

I'm with you on cruise control but found an exception. While going across Missouri on a recent trip, I got 18.4mpg using cruise control and 22.3 without it on the return. The difference was because of the many, many hills. I'd be cruising at 2200rpm, then she'd drop out of overdrive and kick up to 4800rpm halfway up each hill to maintain speed. Without CC, I'd speed up a bit at the beginning, about 3000rpm, and hold it, letting speed drop a bit.
Posted by Phideaux on 01/01/15 at 12:31 AM
@BD: Ain't no babies around here....

@Phideaux: I asked my VW mechanic about that blinker stuff and he said that VWs don't need fluid for their blinkers. Obviously the Krauts have beaten the US to the punch again in auto-tech.

@GG: Cruse Control and rolled up windows is the only way to traverse "The Trail". We screwed up one year and stopped to get something to drink. 2 in our party died before we could get them to a hospital for transfusions.

@Phidaux (some more): That 2010 VW Golf TSI* I was talking about earlier has a 1400cc 4cyl 122HP 6 speed digital automatic that has been getting an overall average of 22+MpG on 87 Octane gas for the 5 years where most of the driving is in congested city and 80+MpH on the highway. She'll produce enough torque to produce a noticeable G force under acceleration beyond 100MpH.
And that same power plant has 160Hp and 180Hp cousins. This new tech is amazing!