The ad copy claimed that it wasn't cheese. Instead, it was "more than cheese." So what exactly was this stuff? 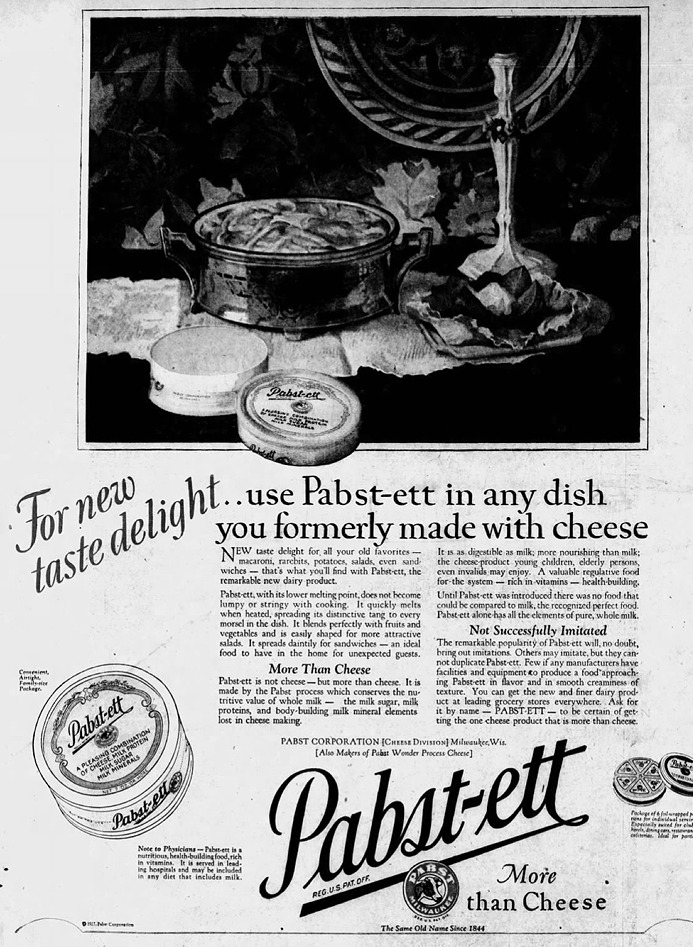 Pabst-ett is not cheese — but more than cheese. It is made by the Pabst process which conserves the nutritive value of whole milk — the milk sugar, milk proteins, and body-building milk mineral elements lost in cheese making.
It is as digestible as milk; more nourishing than milk; the cheese-product young children, elderly persons, even invalids may enjoy. A valuable regulative food for the system — rich in vitamins — health-building.
The Vintage Recipe Blog explains that it was a "a processed whey cheese similar to Velveeta but more spreadable." The Pabst Brewing Company created it in the 1920s as a way to find an alternative line of business during Prohibition. When Prohibition ended, they sold the rights to Kraft, who discontinued the product a few years later. 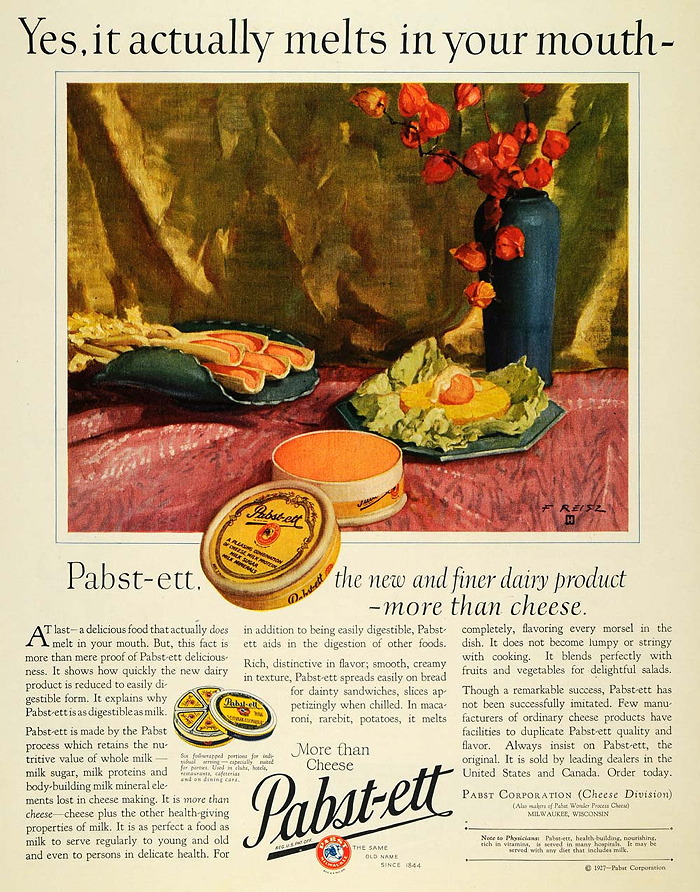 
Comments
This sounds like marketing ahead of wider knowledge. If it is a whey based cheese it would have lactose and be different than hard and even aged "semi-soft" cheeses. Removing whey in the cheese making process and then aging the cheese removes milk sugars and milk proteins (but there is still plenty of milk proteins in hard cheeses--in fact more in the hardest cheeses). Yes it has a different nutrient content in the final product. "More than cheese" is a great way (whey?) to spin the use of the whey by-product to lower costs. There are recipes on the internet to make things like ricotta and other simple cheeses from whey so it is likely still around but not popular enough for anyone to make as a "popular" product.

The stuff still exists; it's called Cheese Whiz.
Posted by Yudith on 11/07/19 at 06:07 AM
Milk, salt, bacteria. That's all you need to make cheese. I stay away from any cheese that lists any other ingredients.

The Pabst-ett stuff sounds like what is called "American Cheese" here in, where else, the U.S. For those of you not within the U.S., American Cheese is a stretchy, rubber-like formed substance that exudes oil like a leaking old car. It can't be called cheese but has to be labelled "processed cheese food" like it is something you feed to cheese to make it grow up healthy and strong.
Posted by KDP on 11/07/19 at 10:35 AM

One of many ways that brewers tried to get by during Prohibition. The Pabst family had indulged in dairy farming in the good times, so this seems to have been a way to squeeze one more product out of the operation. Other brewers made vinegar, ice cream, sodas, etc. Some who had supplied fixtures to their "tied" saloons went into furniture and coach making. Most kept making beer too, that would be denatured of its alcohol content and sold as "near beer."
Posted by Mark McDermott on 12/16/19 at 07:18 PM
Commenting is not available in this channel entry.