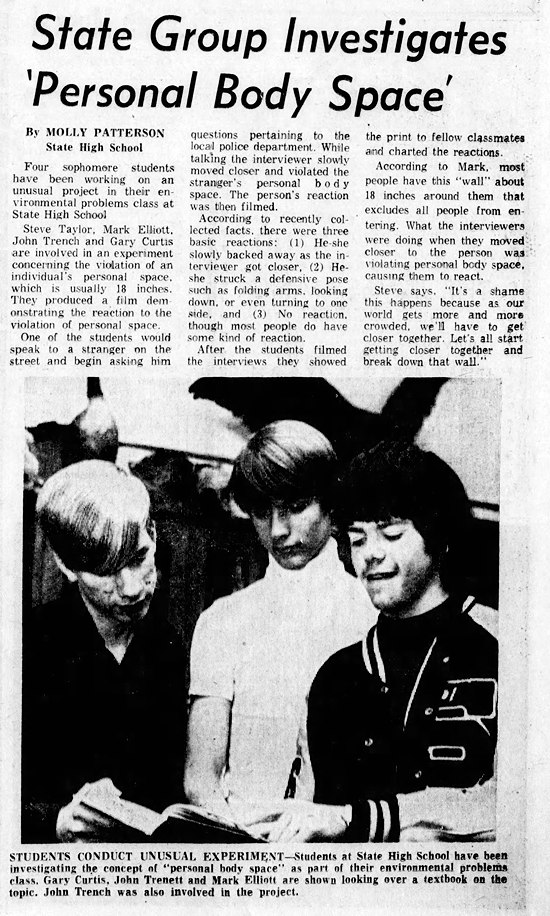 
Comments
This is amusing, because just the other day, when I was forced by necessity to visit Target (to pick up prescriptions, otherwise you can't get me in a major store between thanksgiving and new years), I remembered why I like to wear my cloak when I'm out and about. The advantages of wearing a full length cloak include the fact that people do not press up against you unless there is no other choice. You seem as impassible as a pillar in the aisle, and no one wants to get close enough to touch you. This is very good when you have severe sensory issues like I do combined with panic attacks and social anxiety. (I think the reason people avoid cloaks is because it creates a solid line, rather than a person's profile, and people instinctively avoid something that seems solid like that).

I read about two ambassadors at a ball in the time of Napoleon. The British personal space was further away than Italian's. They were in a serious discussion. As the Italian moved closer for his private chat personal space, the British ambassador would back up a bit to his comfort zone. They were so occupied with their conversation that they didn't realize they had circled the dance floor twice in this comical "dance".
Posted by BMN on 12/18/17 at 12:26 PM
Someday, when the world is so overpopulated that there will be only 288 square inches per person, everyone will have to stand on his/her own two [square] feet.
Posted by Joshua Zev Levin, Ph.D. on 12/18/17 at 07:18 PM
I once visited a museum that had been the country house of some colonial governor of Pennsylvania. A female historical interpreter was wearing a huge hoop skirt, as was the fashion at the time the house was built. She said she liked it because it created her own person space.

John Bruner's "Stand on Zanzibar" (1969) includes the passage: "Some troubledome just figured out that if you allow for every codder and shiggy and appleofmyeye a space one foot by two, you could stand us all on the six hundred and forty square mile surface of the island of Zanzibar." Excellent novel about personal space in a crowded world.
Posted by Phideaux on 12/18/17 at 08:40 PM
Commenting is not available in this channel entry.