Some weird, morbid trivia: After a person dies, their body will usually start to cool down. Except, not always. Sometimes the body of a recently deceased person will actually rise in temperature. The phenomenon is known as "postmortem hyperthermia."

A recent article in the American Journal of Forensic Medicine and Pathology described a case that occurred in the Czech Republic, involving a guy who died of heart disease, while in a hospital:


According to the Czech law, the deceased must remain in the hospital ward for 2 hours after death. In this case, the ambient temperature in the hospital room was 20ºC. One hour after death, nurses started to prepare the body for transport to the Department of Pathology. They noticed the unusually warm skin of the deceased, and a doctor was called back to the hospital room to verify death again. The first record of postmortem body temperature was noted in 1.5 hours after death and peaked at 40.1ºC. Remarkably, the medical staff had concerns about spontaneous combustion of the body and attempted to cool the body with frozen solutions placed near the groin. 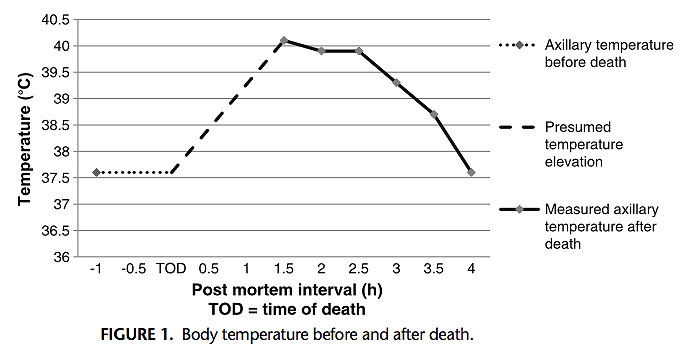 
Comments
Silly that they "attempted to cool the body with frozen solutions placed near the groin." The groin and head are considered the two largest transfer points for heat on the body, but only because there's so much blood flowing through those areas. Of course, after death, there is no blood flow, so only cooling one or both of those areas will do little to reduce the temperature of the body as a whole in the short-term.

Obviously they were a bad person and wouldn't accept their fate, so the portal had to be held open much longer than usual while their soul, kicking and fighting all the way, was dragged down to hell.
Posted by Phideaux on 06/05/17 at 09:40 PM
Commenting is not available in this channel entry.