Idaho farmer Alan Reed invented Potato Ice Cream in the mid-1980s. This wasn't potato-flavored ice cream. Instead, it was ice cream that included potatoes (in addition to dairy) as an ingredient. The advantage of this was that the potatoes sweetened the ice cream, eliminating the need to add sugar. The result was a lower-calorie, sugar-free ice cream. Reed claimed it tasted as good as regular ice cream.

However, Reed had trouble getting his potato ice cream distributed, so he sold the formula and marketing rights in 1988 to businessmen Rich Davis and James McFrederick. I assume (because I've never seen potato ice cream in a store) that they didn't manage to make a go of it either. The fact that there were better (or cheaper) sugar substitutes probably doomed Potato Ice Cream.

Reed is still operating his dairy farm and selling ice cream. But his website makes no mention at all of potatoes.

However, I don't think he's entirely given up on the idea of using potatoes to sweeten dairy, because his chocolate milk contains potato flakes (if you look closely at the ingredients). And this chocolate milk is sold in the gift shop of the Idaho Potato Museum. 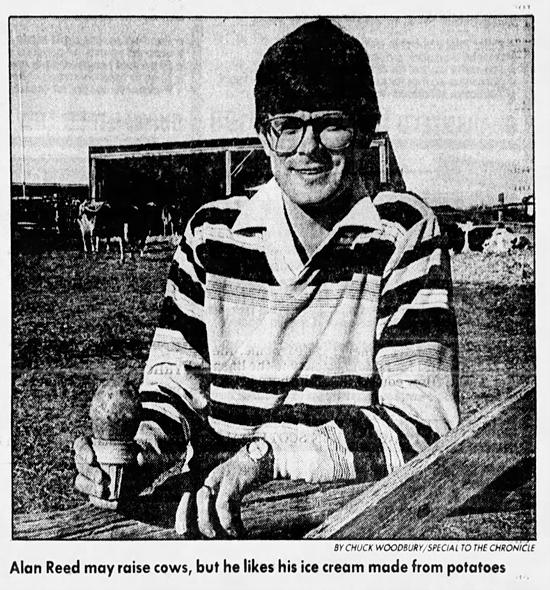 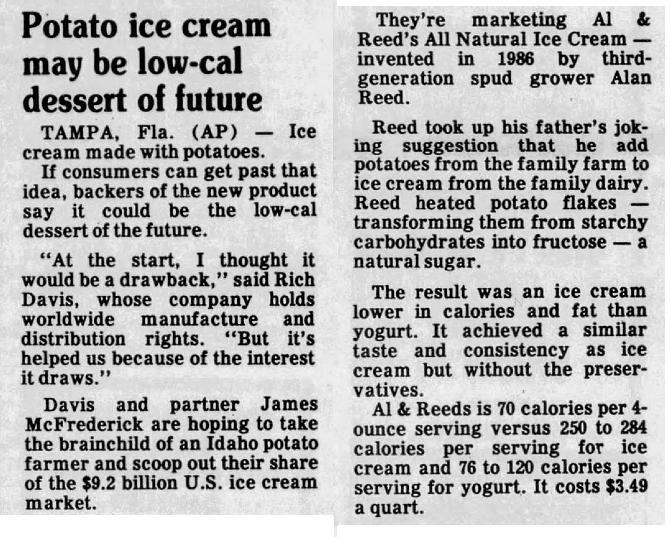 
Comments
My high school biology teacher told us during a discussion of enzymes found in your mouth, that if you would chew on a soda cracker long enough it would turn to sugar. I took him at his word and later found that he was right, that starches could be turned to sugars, although it would take more time than anyone would be willing to spend chewing on that cracker.
Posted by KDP on 09/01/20 at 02:51 PM
I thought the addition of potatoes was to keep the ice cream from running to your elbow when it's hot. I know potato flakes are still used in advertisement as a non-runny substitute for ice cream.
Posted by Yudith on 09/02/20 at 05:55 AM
Commenting is not available in this channel entry.