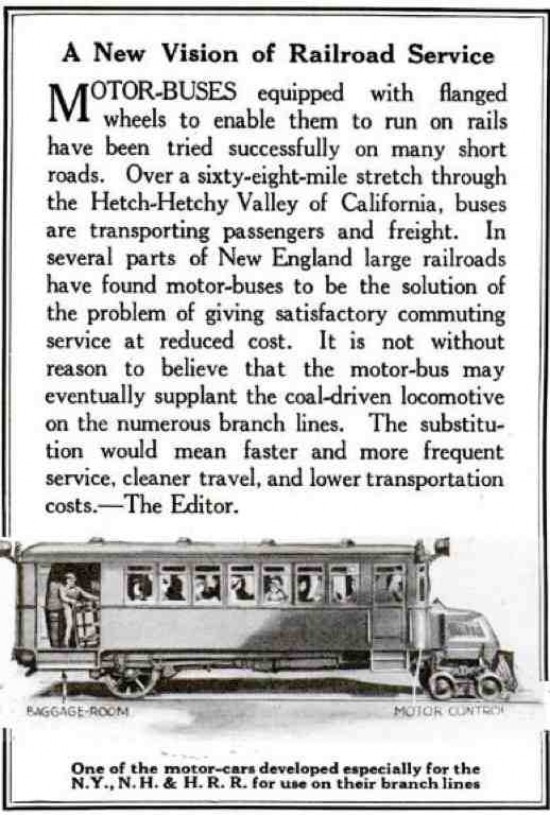 
Comments
These were not so short lived as you might expect. The Denver & Rio Grand Railway used a variation for years in the mountainous mining back country where their narrow gauge rails existed. As the Pop Mech article states, the justification was that it was not cost effective to run a full size steam locomotive into areas with small populations but still requiring rail passenger and light freight service.

The rail car in flat areas didn't rally stand a chance outside urban areas. The auto and bus, as stated, were more efficient in their duties.
Posted by KDP on 11/20/12 at 10:09 AM

As the rails in the US get older and less safe for heavy trains, this may start making sense again. It has GOT to be a whole lot cheaper to run a "bus" on rails than over asphalt.

I used to ride a DMU train for my commute to Birmingham when I was at Aston. It was a normal-looking 4-car train, powered by Diesel, but with a semi-auto 4-speed gearbox. It sounded just like any other city bus as it moved off from the station.
Posted by TheCannyScot in Atlanta, GA on 11/20/12 at 12:23 PM
A single breakdown could stop traffic in both directions for hours.
There is no passing slower vehicles.
Two-way traffic requires either dual tracks or frequent passing sidings.
It would cost a fortune to lay track in the middle of EVERY street, or even every boulevard, and you would still have to walk to get to it and to get home from it.
Posted by tadchem on 11/20/12 at 05:38 PM
Here come da bus .. Here come da bus .. hehehehehe
Posted by BrokeDad in Midwest US on 11/20/12 at 05:41 PM
There was a time when small interurban electric trollies were all over the eastern US all the way to the Mississippi. Also on the west coast especially in California. Then along came General Motors, Standard Oil and US Steel and bought them all up and shut them down so we could all buy cars and support the corporations.
Posted by Rodney on 11/21/12 at 01:18 AM
Very much like the Rio Grande Sothern "Galluping Gesse" as shown at http://drgw.free.fr/RGS/Goose/Goose_en.htm
Posted by Bruce Yelen on 11/21/12 at 04:16 PM
Pretty neat looking locomotor bus!
Posted by Patty in Ohio, USA on 11/22/12 at 12:06 AM
Commenting is not available in this channel entry.