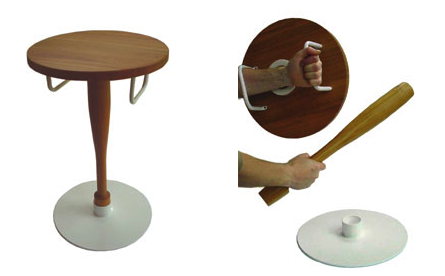 
Comments
Rule #1: Don't bring a club/knife to a gunfight.

Rule #2: Don't bring a gun with a caliber that starts with a number less than 4.


Too many pillow fights in your room with scantily clad women?
Ever start to dream that you are in a melee while sleepwalking?
Ever lay on your bed and want to randomly grab some wood firmly and energetically beat things with it?

Then this Product is for you!
Posted by Fluffy Bunny Slippers on 04/01/14 at 02:05 AM
I like your rules Expat. People thought I was crazy getting a Glock in .45GAP until the ammo shortage. Odd equaled available.
Posted by BrokeDad in Midwest US on 04/01/14 at 05:12 AM
Yeah, 'cause nobody ever got killed with his own gun.

Wait, more people are in the USA than are killed with a burglar's gun?

Gosh. Who'd have thought. (Well, the NSA certainly never does.)
Posted by Richard Bos on 04/01/14 at 06:34 AM
Well, lets see: Chicago, New York, and Wash. D.C. have the strictest anti-gun laws in the US and the highest rate of gun violence.

Kenishaw, GA requires that every homeowner own and know how to use a hand gun and has almost zero crime of any kind.
Posted by Expat47 in Athens, Greece on 04/01/14 at 09:47 AM
It aint the size of the gun. It's the motion of the munitions! :lol: :coolsmile:
Posted by Tyrusguy on 04/01/14 at 10:03 AM
Hey Expat, is this enough gun for a gunfight?
http://www.vincelewis.net/60magnum.html
(BTW .60 magnum is an elephant hunting load!)
Posted by Captain DaFt on 04/01/14 at 11:12 PM
Too much! That's an arm breaker!
Posted by Expat47 in Athens, Greece on 04/02/14 at 12:00 AM
Expat: Chicago, New York and Washington are cities on a world scale, with considerable poverty problems - in fact, the first one is itself bankrupt. Kennesaw, Georgia (which I presume you meant) is a small town, not much larger than the one I live in, and decidely prosperous. That alone should be reason enough for the difference in crime rate.

I'll also note that my town, which has Dutch gun laws and therefore guns only in the hands of professionals, has a similar if not better crime rate than Kennesaw, despite being on a similar scale, AFAICT, rather less wealthy. Gun crime is not low here, it's negligible - in fact, I can remember two, in decades. Burglaries are rare.

If you want to battle with statistics, quote them right.
Posted by Richard Bos on 04/02/14 at 05:37 AM
@Richard: Violent crime increased in Australia and other countries that banned firearms. It just caused criminals to use knives and other items.

I believe there in Norway, etc even knives of a certain type and size are banned for carry but that didn't stop them being used in crimes.

I'll keep my guns and ammo. There is never one out of quick reach and I never leave the house without at least one. Normally I carry a backup smaller caliber one just in case like a .380

Statistics can be manipulated as needed.
Posted by BrokeDad in Midwest US on 04/02/14 at 09:18 AM
I sleep with a battle axe next to me in bed.

OOPS deary, I didn't hear you sneak up behind me! 😖
Posted by BMN on 04/03/14 at 12:27 AM
Home Run.
Posted by Rachel on 04/03/14 at 01:54 AM
Gun control always involves a lot of talk about burglers & hunting with the youngsters, but there's one thing that always seems absent: The 2nd Amendment was originally for keeping the government in line. I don't think the military is entitled to fire superiority. 100-round clips, armor piercing bullets, & fully automatic firearms are all good things that belong in the hands of citizens. Why, if you can find/buy/make a nuclear device, I don't see why you shouldn't get to keep it.
Posted by BHicks on 04/03/14 at 09:29 PM
Just don't somehow use iTunes to make your nuclear device... it's against their ToS.
Posted by Rachel on 04/03/14 at 10:21 PM
Commenting is not available in this channel entry.