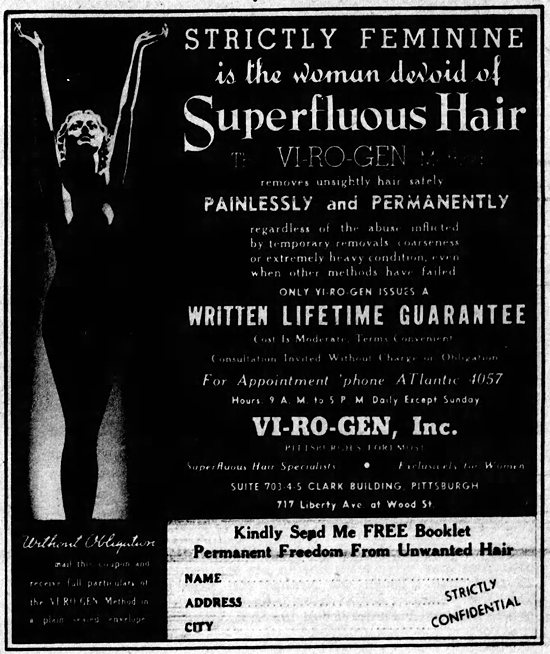 
Comments
It is even stranger that until century ago, women didn't worry about body hair. It wasn't until clothing fashion began to show more parts of women that removing hair became the norm. Or so I've been told by a friend who was a fashion designer. I sometimes wonder why it didn't catch on for men - they generally have a lot more body hair per square inch.
Posted by KDP on 11/05/21 at 09:13 AM
I have it on good authority (as in: one boozy evening, when there might have been herbals in the air, someone spieled off an explanation which was enthrallingly plausible, no matter that they might have been pulling it all out of their . . . thin air, and some of it stuck in my memory):

Hair has been seen/scene/obscene off and on since the ancient Greeks. The current trend against armpit hair dates to the early 20th Century when sleeveless dresses came into fashion. Women had to shave their armpits out of modesty because it suggested hair in the nether regions (if unshaven, raising an arm was visually equivalent to spreading their legs).

As for men, we be hairy beasts, and shaving takes away from our animalistic nature/appeal.
Posted by Phideaux on 11/05/21 at 10:55 PM


The name Vi-ro-gen seems the opposite of feminine, as in virile.
Posted by ges on 11/06/21 at 07:13 PM
Reminiscent of the conversation in "The Wolf of Wall Street" about modern women having no hair lower than the eyelashes.