During the year-and-a-half that Leila Davidson Hansell suffered from tuberculosis, she developed a profound fear of being interred for eternity in the darkness of the earth. She beseeched her husband, "Don't let them bury me in the cold ground. Lay me where the sun will shine on me all day long."

Her husband obliged and hired undertaker J.M. Stepp to build an aboveground vault for her topped with thick squares of prism glass. When she died in 1915, she was placed inside this unusual grave, located in Hendersonville, North Carolina's Oakland Cemetery. The locals began referring to her as the "sunshine lady." 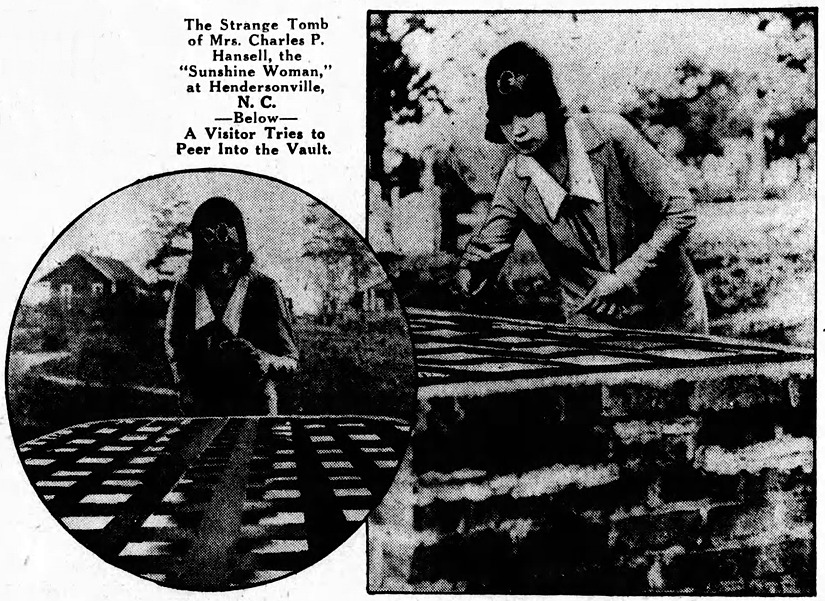 The undertaker always insisted that Mrs. Hansell lay inside a coffin in the vault. However, many people who peered through the thick glass claimed that they could see her skeleton. As described in a 1927 article in American Weekly magazine:


Many and varied are the stories told of what is within. Some describe a full-length figure clothed in a grey dress, with lace at the wrists. Others are certain that the entire interior of the vault around the casket is filled with flowers. Still others... relate that there is a smile on her face. More recent visitors describe what they have seen as the upper half of a human skeleton in miniature.
In the early 1930s, the sightings took on a new twist. The growth of two spruce pines in the cemetery had caused shade to fall over Hansell's tomb in the afternoon. This inspired people to think that they could see her skeleton turned on its side, as if she had been disturbed by the shadows falling over her.

By 1937 the cemetery had had enough of the crowds of people the sunshine grave was drawing. So they covered the top with concrete. According to Hendersonville historian Doug Gelbert, the official reason given was that "Many people expectorated on the glass and for sanitary reasons the top will be covered."

Hansell's grave, with its concrete top, remains in Oakland Cemetery to this day.

Incidentally, Mrs. Hansell's maiden name was Davidson, and that was the same Davidson family after whom Davidson college in North Carolina was named. So she came from money. 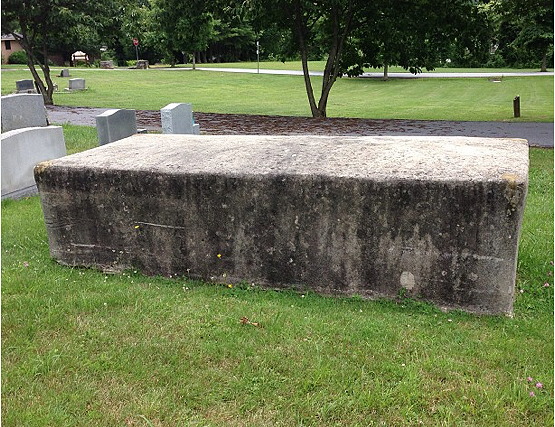 The sunshine grave as it looks today. (source: Instagram)


Comments
"... the cemetery had had enough of the crowds of people the sunshine grave was drawing." So they covered the top with concrete. Don't waste spending your money past your death, others won't think past their own convenience or greed; besides that whole "camel passing through the eye of a needle thing". That being said, I was just put in FB group jail for a day by the scientists in a geology group for daring to say my wife was a stone healer and that I saw and felt them work. Like UFOs, nobody says they don't exist from behind the port hole in one. Some people grease up every night just in case you know.......
Posted by John on 11/05/19 at 12:05 PM
This grave is a great biology lesson; you can watch the corpse decompose in real time! They just poured concrete on it when the show was over.
Posted by Yudith on 11/06/19 at 05:28 AM
Commenting is not available in this channel entry.