A few weeks ago, Paul posted about a plan the U.S. military cooked up during WWII to destroy Japan by triggering volcanic explosions. The article below describes a similarly mad plan -- the Bat Bomb. The idea was to strap incendiary devices to bats, and then drop the bats on Japanese cities.

I scanned the article from the Atlantic Monthly, December 1946. I think this was one of the first public descriptions of the bat bomb. 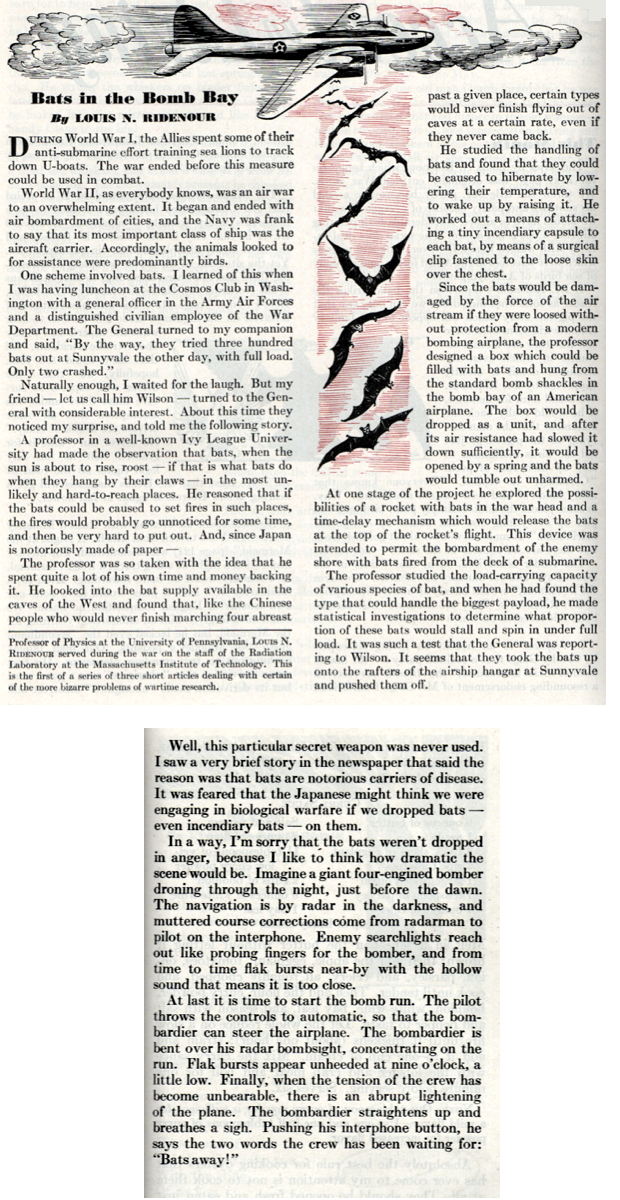 
Comments
Man, that idea is just batty.
Posted by Patty in Ohio, USA on 03/08/12 at 09:18 AM
I've heard of some of the "wild ideas" that seem to plague wars regardless of when and where. But some are just more batty than others.
Posted by Expat47 in Athens, Greece on 03/08/12 at 09:21 AM
I heard of this previously and I always though that it was one of the most innovative ideas. They actually destroyed a model Japanese village this way when testing out the bat bomb and, if I remember correctly, another building by accident. What better way to destroy a building then have a small little capsule of napalm smuggled into the darkest most out of the way place possible, then multiply by 1000.

Unfortunately they bypassed the bats in favor of nukes and I'm pretty certain charbroiled bat is better then radiated human
Posted by Fluffy Bunny Slippers on 03/08/12 at 10:02 AM

All sides had wacko ideas. The Germans had a tank on the drawing board that would have required a crew of 100 man, weighing in at more than 1500 tons, thereby chewing up every road that it would have ever traversed and never being able to cross a bridge. Top speed would have been about 5 miles an hour making it an excellent target for every Allied bomber.

And it never stops. When I worked for the Air Force I came across a study of a weapon system named "Sergeant York". It was supposed to be a high mobility anti-aircraft wonder weapon. Unfortunately it was overweight, too slow to track targets and generally not well designed. The first demonstration had the guns start to track the review stand where the spectators were seated. After these "features" were weeded out the last rounds of testing revealed that it couldn't hit stationary drones and Sergeant York was mercifully put to death in 1985. A sad association to a great American war hero. I'm sure Alvin is spinning in his grave because one of them is parked at the Sgt. York Memorial Museum.
Posted by KDP on 03/08/12 at 10:25 AM

And don't forget about the Valkyrie -- the US Airforce bomber designed in the late 50's that was supposed to be nuclear powered!
Posted by odschneider on 03/08/12 at 02:32 PM
I read about this years ago. IIRC the problem wasn't with the bats successfully burning down buildings (My memory matches with Fluffy Bunny Slippers, that they even burnt stuff they weren't trying for), but rather with the drugs they used to keep the bats asleep for the flight over to Japan.
Posted by Miles on 03/08/12 at 05:01 PM
Reminds me of the dogs that were trained by the British to crawl under tanks in WWI. They got explosives tied to them, and the idea was ... well, yoú understand the idea.
Fluke of the plan was that they were trained with British tanks. So the one and only time they were actually released, they only crawled under 'friendly tanks'.

Initially, they were unsuccessful, because the training and actual targets smelled different, which caused 6 animals to become confused and return to their handlers, bomb and all. However, the Russian military later claimed 300 enemy tanks destroyed via dog.
Posted by Dumbfounded on 03/09/12 at 09:24 AM
Commenting is not available in this channel entry.