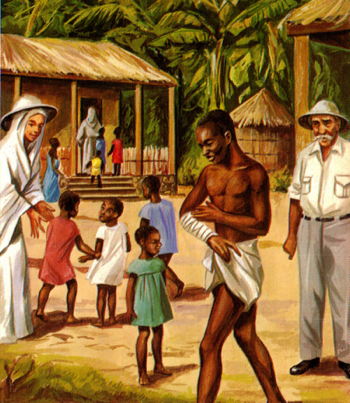 
Comments
Of late I've come to believe that the continued meddling of Westerners with their values, mores, and aid are the cause of the continued human problems in the worse affected areas.
Posted by Expat47 in Athens, Greece on 03/09/12 at 10:50 AM
Well they sure thought they were doing a great job of civilizing the pagans. Trouble is, sometimes western civilization is not so civilized either.
Posted by Patty in Ohio, USA on 03/09/12 at 11:34 AM
The Ted Nugent song "Great White Buffalo" is running in my mind.
Posted by KDP on 03/09/12 at 12:25 PM
And you Yanks did so much better.
Posted by Gerard on 03/09/12 at 02:05 PM
Gandhi: “What do I think of Western civilisation? I think it would be a very good idea.”
Posted by Harvey on 03/09/12 at 06:02 PM
The Yanks were good at being a colony... They learned to exterminate the indigenous population, import and enslave a different population, and they learned to become a superpower afterwards... It truly is the white man's burden...
Posted by Fluffy Bunny Slippers on 03/09/12 at 07:52 PM
So . . . the colonials never gave medical aid to the Africans?

As for English colonialism, the one really telling bit from India was the example Ghandi used to give of the English dictating to the natives about how they should live; The Colonial administration only ever restricted one religious act in India during the several centuries of rule - they banned the practice of Suttee, that romantic gesture where a grief-stricken widow would be helped onto her late husbands funeral pyre ( Whether she wanted to go or not ).
Posted by DFStuckey on 03/31/12 at 02:59 AM