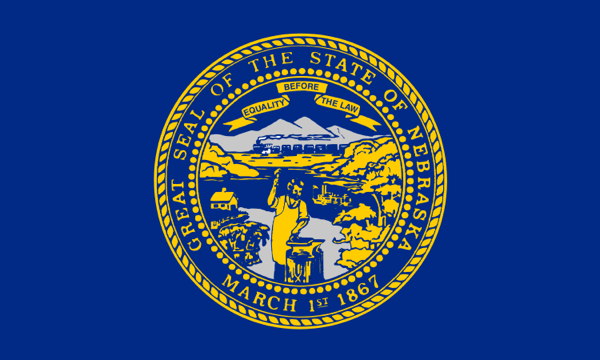 
Comments
He probably wants to get rid of that "Equality Before The Law" slogan, or people might get the wrong idea. How about something more in tune with the times, such as "One Dollar, One Vote"?

Also, it looks like Nebraska is only one month from its sesquicentennial. Congratulations, Nebraskans!
Posted by Fritz G on 02/01/17 at 09:07 AM

If you're talking Hillary Clinton's campaign, that should about $10 per vote or maybe $2M per electoral college vote, which is the only one that really matters.

The obvious solution is to remove detail. Emulate the flag of Alabama or New Mexico, which has no top and bottom, so it cannot be hung upside-down.
Posted by Virtual on 02/01/17 at 12:49 PM
I say let Ernie Chambers design a new flag! I guarantee it wouldn't be boring.
Posted by Phideaux on 02/01/17 at 08:29 PM
This kind of flag is called a "militia flag", and too many states have them. Each is simply the state seal, on a solid-colored field. Mostly these are in the Eastern states, but Nebraska and Washington also have them.

I once had a girlfriend named "Hope" who liked boating, so, as a gift, I got her a Rhode Island* state flag. It has an anchor and the word "Hope". (*Technically, it's "Rhode Island and Providence Plantations", making it the smallest state with the longest name.)

Many state flags have interesting stories. Maryland's is derived from the coat-of-arms of Lord Baltimore. Texas' flag is the same that Texas had when it was an independent republic. Similar for Hawaii, except it was an independent kingdom. California's was designed by a nephew of Mary Todd Lincoln, but well before she became first lady.

I would like to see most of these "militia flags" be replaced with more interesting flags.
Posted by Joshua Zev Levin, Ph.D. on 02/02/17 at 08:03 AM
Thanks for the mention of the California flag, Joshua. Ironically that bear on the flag is extinct in the state, the subspecies disappearing in less than two hundred years.
Posted by KDP on 02/02/17 at 08:27 AM
Commenting is not available in this channel entry.