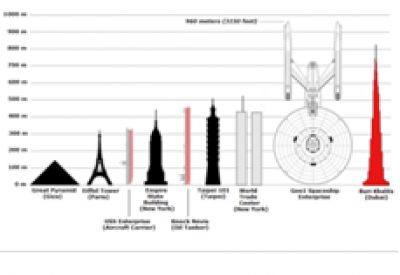 
Comments
I hope they do it! I have been quite disappointed with the retirement of the shuttles and no other vehicles planned to take their place. This would be so great to further space exploration. I grew up with the wonder of space just coming within our grasp yet we never really got that far. It fascinates me.
Posted by Patty in Ohio, USA on 05/17/12 at 07:05 PM
Phasers and Photons full spread !!!
Posted by BrokeDad in Midwest US on 05/17/12 at 07:09 PM
This isn't April 1st, is it?
Posted by Robert on 05/17/12 at 07:33 PM
In space it takes as much energy to stop as it does to start so... for 45 days you're hookin' and bookin' and the last 45 days you're hauling on the reins.

We CAN do this. We OUGHT TO do this. And per the comments I saw on YouTube, people are seriously discussing how to mine asteroids to build it. Yes! We WILL do this! Okay, it's fun to think about, anyway.

Logged the Enterprise effort in my little Transport Future album, and h/t'd you.
Posted by A Mindful Webworker on 05/18/12 at 12:18 PM

Thank you for the mention honey, I appreciate it.
Posted by Patty in Ohio, USA on 05/18/12 at 12:35 PM
I'll get excited when they come up with a warp drive.
Posted by Cecil on 05/18/12 at 05:32 PM
I'm a little perplexed by the ion propulsion drive. One of the key reasons they are being used now is because they so little actual force as to be be very delicately controllable. The ones I've read about exert roughly the same amount of force as gravity exerts on an 8.5 x 11 inch sheet of paper.
Posted by Miles on 05/18/12 at 07:18 PM
But they exert it continuously for a very long time, allowing high velocities to be built up, shortening trip times. Chemical rockets have very high thrust but only last around ten minutes, and once they're out, they're OUT.
Posted by Cecil on 05/18/12 at 08:11 PM
Cecil, if I understand space physics correctly the slow build up method requires an equally slow breaking method. So, what you want is a very rapid acceleration to maximum speed, then coast until you need to flip and decelerate equally as rapidly.

Yes, that's how chemical rockets do it, and is indeed the fastest method with that type of propulsion. However, the lower specific impulse of chemical rockets means there's a limit to the maximum speed that can be reached quickly and the amount of delta-V it can produce. Then there's a long coasting period typically 9-month/2 years to reach Mars. So far, very little rocket braking has been used since the main rocket expends all its fuel at the beginnning of the trip (and is jettisoned). Mostly thanks to Mars's atmosphere, tenuous as it is, we've used aerobraking to slow for landings.

Ion thrusters, though low in thrust and acceleration, can maintan that thrust for the whole trip at a much higher specific impulse (pound-seconds of thrust per pound of fuel), building up higher velocities that shorten the trip time despite the lower acceleration. Ion thrusters developed thus far are very low thust and suitable only for very low weight vehicles, so I wouldn't expect to see the Enterprose tooling along on them any time soon.